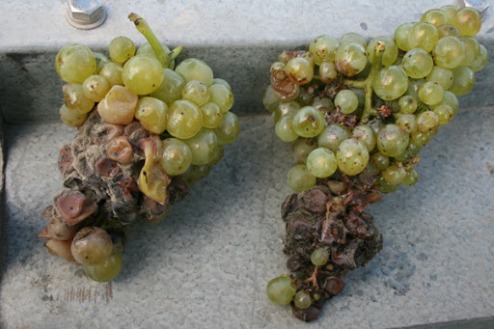 A pleasant vineyard. Sing of it! A love song for the vineyard of my Beloved. My Beloved had a vineyard. He planted it on a very fertile hill, where it would get the best of the sunlight and the best of the rain. He cleared the ground of stones. He tilled up the ground until it was ready to plant, and He planted it with the best of vines. He built a tower to guard it, to make sure no wild animals would destroy His vineyard. He dug out a wine press in it, in expectation and eager anticipation of the fruit, which would be crushed to make wine to gladden the hearts of all people. And then He waited: for the vine to grow, for the fruit to mature. But this is a love song gone wrong. He looked for good grapes, but it produced only wild, worthless grapes. Rotten, stinking grapes. And my Beloved says to you, the people of God: What more could I have done for My vineyard that I didn’t do? Why did I look for good grapes and find only worthless grapes?

This vine is Adam and Eve. God formed them out from the dust; He planted them in the Garden; gave them everything they could ever want or need. He blessed them beyond all imagining. They had the true freedom of the children of God to rejoice fully in all His gifts. They lacked nothing. And how did they repay God? How did they thank Him for all of this? They turned their backs on their Creator. They rejected His Word for the words of a liar. This is how they repaid Him for His goodness.

This vine is Israel, suffocated by their slavery in Egypt. God brought them out by the hand of Moses; He went before and after them; He made a way in the sea so that they could walk across on dry land. He brought them to the very edge of the Land of Promise. He protected them from their enemies. And how did they repay, how did they thank Him for all of this? They turned their backs on their Deliverer. They rejected His Word for what their eyes and ears were telling them. They saw a people stronger and more numerous than they, and they refused to hear the promise of God that He Himself would fight for them. This is how they thanked their God. The vineyard of Yahweh of Hosts is the House of Israel; the men of Judah are His pleasant planting. When they finally came into the Land of Promise, He looked for justice and found only bloodshed. He looked for righteousness and found only an outcry.

This vine is Israel at the time of Jesus. He had sent to them prophet after prophet after prophet; some they beat, some they stoned, some they killed. But He would not let them go. Insanely and unaccountably, to our mind, He sent His own Son; He said, surely they will respect and hear Him. And how did they repay their God, who came to them in the flesh? How did they thank their Savior? They threw Him outside the vineyard and crucified Him.

This vine is you and me. He planted us in a very fertile field, in the most prosperous nation on the face of the earth. He put us where we are free to worship Him and hear His Word at any time. He gave many, if not most of us, to faithful Christian parents, who brought us to the services of the Lord’s House, who taught us His Word, and provided for our instruction. They brought us to the baptismal font, where God put His Name on us—His Name, which is a strong tower to guard and defend us. He claimed us for His own. He gave us His unlimited grace and mercy in Word and Sacrament. How have we repaid your God? How have we thanked Him for His many blessings? Have you rejoiced to hear His Word week by week? Have you rejoiced to receive His gifts week by week, as He feeds and nourishes His vine to make it fruitful? Have you shown justice to those who need your help? Shown the righteousness and mercy of God to your neighbors, who need the same forgiveness God has given you? Have you produced the fruit of good works, serving your neighbor in love? Have you been faithful to bring your children, or your grandchildren to His House to hear His Word? Have I preached it faithfully and served all the people whom God has granted to my care? Have I shown the same care for my family as for my congregation? Have I prayed for you day in and day out?

The truth is, this vine cannot be fixed. It cannot be rehabilitated. There is nothing you and I can do to help it reach its full potential. It is sick, sick unto death, as Adam and Eve and Israel before her. This is a love song gone wrong. O God! O God of Hosts, turn again and see. Look down from heaven and behold this vine, the stock which Your right hand planted; and Your Son whom You have made strong for yourself! (Psalm 80:14-15). Have mercy, O God. And He says, Yes. I will have mercy for the sake of My Son. This vine is good for nothing except to be burned. This vine must be destroyed in order to be restored. It must die in order to rise again. And so He plants a new vine in the midst of the ruins of the old one. He plants a new Vine in the womb of a Jewish virgin. And then He removed the hedge from around His Son, allowed sin to overcome and death to trample down His vine. The vine was crushed by our sin and so by the Father’s wrath. But the Father refused to let His holy vine see corruption; He raised the Son on the third day. And now this vine has spread far beyond the borders of Israel and Judah. It has spread to every nation. He has grafted you in to a song that began in a Garden and will end in the City with the Tree of Life at its center. This is a love song, after all. A love song of a Father for a Son, and of a Son for a Father; of a God for His people. This Vine, this Son, says, I am the true vine, and My Father is the vinedresser. I am the vine and you are the branches. Apart from Me you can do nothing; you can bear no fruit; you have no life in yourself. But in Me, with the wine of My blood flowing in your veins, and as I feed you with My flesh, you cannot help but bear fruit. You did not choose Me, but I chose you, and I appointed you to go and bear fruit. Fruit from your work as husbands and wives, parents and children, the Lutheran Women’s Missionary League, the Body of Christ in East Wenatchee, WA. He appointed us to bear fruit that will abide. Fruit that will last, even into eternity. The fruit of Christ, crushed to gladden the hearts of all people. So, as Paul says, walk in love, as Christ loved us and gave Himself up for us, a fragrant offering and sacrifice to God (Eph. 5:2).

And yet, sometimes, as the branches of the Vine planted in this soil, it can still seem as if you are being trampled. As if sin and death, like wild animals, are running unrestrained in your life. As if your faith has gone, as if all feeling is lost, as if sin and death are victorious and you are defeated. As if the world has taken all your joy in the God of your salvation and replaced it with apathy, with so much less than joy, with all its silly idols. But hear the Word of the Lord through His prophet: Your dead shall live; their bodies shall rise. You who dwell in the dust will arise and sing for joy! (Isaiah 26:19). In that day—a pleasant vineyard! Sing of it! I, Yahweh, am its Keeper. Every moment I water it. Lest anyone destroy it, I keep it night and day. I have no wrath. (Isaiah 27:2ff.). Not anymore. No, there is no condemnation for those who are in Christ Jesus. You, who are joined to the cut down and resurrected Vine, Jesus, you will not be uprooted, because the Father will never uproot His Son. You will not be destroyed; you will not die. A pleasant vineyard. Sing of it!