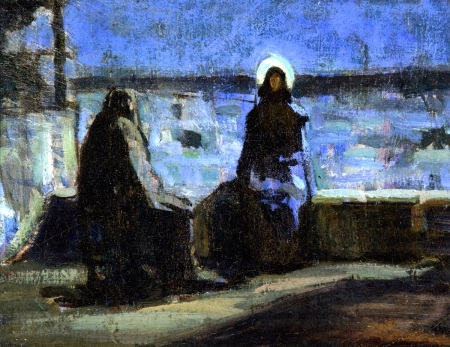 But Jesus doesn’t say that. He doesn’t say that spiritual birth is like physical birth, except in these ways. He says there are two different kinds of birth. The spiritual is no less physical or concrete than the fleshly. But they are different. Jesus says that what is born of flesh is flesh. The child who is born from the relationship of his father and mother can only be what they are: flesh. Since Adam and Eve, there is no possibility of those born of flesh living in anything other than this creation. It was not always so. God breathed into Adam and he became a living creature. God put His Spirit in Adam and Eve, unlike every other creature. But they gave up the Spirit when they listened to a word other than what God had spoken. Man lives by every Word that comes from the mouth of God, and so Adam and Eve truly died, truly gave up the Spirit, truly became only flesh. And flesh and blood, of itself, cannot inherit the Kingdom of God. What is born of flesh is flesh.

But what is born of Spirit is spirit. Jesus is flesh and blood, but He is also Spirit. And so the Son comes down from heaven and unites Himself with flesh in the womb of the Virgin. The only one who has descended from heaven; the only one who has seen God; the only one who truly makes known God’s love in the flesh. And He brings the new birth from above. He is the only Son of God. But He comes to make us children of God. How does it happen? Only by water and the Spirit. It comes from above, but it doesn’t happen above. It comes from God, but it doesn’t happen in heaven. It doesn’t happen in our spiritual speculations. It doesn’t happen in our pious thoughts or imaginations. It doesn’t happen in our private meditations on how nice we think God is. It happens where the Spirit hovers over the water and speaks life into existence where there was none before. You can’t control when the Spirit creates life, but you can know where it’s happening: when the Spirit speaks. And the Spirit speaks the words of Jesus. If the “spirit” isn’t speaking the words of Jesus that He has delivered to us by apostles and prophets, you can be sure that it isn’t the Holy Spirit speaking to you. The Spirit always speaks the words of Jesus.

The birth of children of God doesn’t happen by blood. It doesn’t happen because of genealogy, or race, or nationality. It doesn’t happen because of your parents, who are flesh themselves. The birth of children of God doesn’t happen by the will of the flesh, because two people fall into what we call love. The birth of children of God doesn’t happen because of the will of people. No one in the history of this world—excepting the Son of God—has ever chosen to be born. No one ever said, “OK, mom and dad. I think it’s a good time for me to be born into the world.” Neither does any person choose to be born of God. It is a gift from God, given by the Spirit in the water as He speaks the words of Jesus. Jesus says by water and the Spirit. Paul says the same thing in his letter to Titus, when he says, “When the goodness and love of God our Savior appeared in the world—when the Son took flesh and was born from Mary—it was not because of the righteous actions we had done, whereby we proved to God our spiritual worth. But because of His great mercy, He has given us the washing of the second birth and the renewal of the Holy Spirit, whom He has poured out on us richly in Jesus Christ, so that we might become heirs of God, having the hope of eternal life.

God chose you when He sent His Love into flesh, and we crucified that love. He came down from God to give us new birth, and then He was lifted up on the cross. He was lifted up so that He could draw all people to Himself, make children of God to join Him in the Kingdom. But the fascinating and astounding thing is that this birth doesn’t happen in heaven, and it doesn’t happen at the cross: it happens where the Spirit and the water are, where Jesus’ words are heard and believed. And when He makes children, He does what good fathers always do: they feed and protect and nourish their children. He keeps speaking the words of life to you, so that you rise up and live like the dry bones in Ezekiel’s valley. He gives you food that you cannot get anywhere else. He sends bread from heaven for you, the flesh and blood of Jesus, who is risen from the dead. Normally, flesh and blood do not give life. But this is Jesus, God’s Son, we’re talking about. And He is flesh and Spirit, so His flesh is life, and His blood is life. He keeps you as His children, and He never leaves His children alone. To those who believe in Him, He gives the Kingdom of God, where you are called His children. What great love the Father has sent in His Son, that we, too, should be called His children!

And to His newborn children, growing up in Christ, Paul reminds us through Titus that we should be careful to devote ourselves to good works. Those who are made alive with the living Spirit of the living Christ walk around in that new life doing good works for those who need it from them. You have children, you have parents, you have other members of the Body of Christ, who need your good works. So the Christian life, though never easy, becomes amazingly simple: we live forever before God in the faith that the Spirit has given us in Christ; and we live before other people in the love He has poured out into our hearts. It is in both this faith and this love that our Father will keep us, until all the children of God finally see, with our own eyes, the Kingdom of God. And so we will, as the Revelation describes it: the New Jerusalem, the holy city, where God and the Lamb dwell, will come down, like the love of God in Jesus, out of heaven. We will be meet Jesus in the air, but then we will all live forever with our Father in the reborn and renewed earth, just as God always intended for His children.