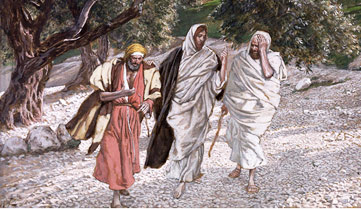 These disciples are on their way home. They had gone up to Jerusalem for the Feast of the Passover, these disciples of Jesus, but now that He’s dead, they’re on their way home. Perhaps they felt how we feel when we leave a cemetery. It doesn’t feel quite right to turn our backs on the grave, but there’s nothing left for us to do. So we turn around and go home. These disciples are on their way home, and they’re talking and discussing, maybe even arguing or disputing. They’re doing theology, I think. They’re talking about God, and what it means that one who called Himself the Son of God is now dead. What does it mean for God? What does it mean for His people? What does it mean for them? They’re doing their theology, when the Theology, the theou logos, the Word of God in flesh comes up and walks beside them. He is not just a word about God, but the Word from God, the Word who is God. He asks them, “What are you talking about as you walk along the way?” And they stop, filled with sorrow and grief. “Are you the only one passing through Jerusalem who doesn’t know the things that have happened there these days?” And Jesus says, “What things?”

The disciples have all their facts correct: About Jesus of Nazareth, a man, a prophet, mighty in word and deed before both God and men. He was handed over by our leaders, and was crucified. We had hoped…we had hoped…that He was the one who was going to redeem Israel, just as God redeemed Israel from Egypt. But now it’s the third day—the day on which He promised to rise from the dead—and He’s not here. Some women went to the tomb and they saw some angels who said He was alive. Then some other disciples went to the tomb and saw it empty, but they didn’t see Him. And now the day is almost over, and where is Jesus? And Jesus, though they don’t know it’s Him, says, “How foolish! How slow, how sluggish, of heart to believe all that the prophets have spoken! Didn’t you know it was necessary for the Christ to suffer these things and enter into His glory?” And beginning with Moses—with Genesis—and all the way through the Prophets, Jesus interpreted to them all the things in all the Scriptures concerning Himself.

What a Bible study that must have been! To have Jesus Himself opening up the Scriptures and saying: all of this, it’s about Me. Before Jesus opens their eyes to what the Scriptures really are, they cannot see Jesus. It’s not just a physical phenomenon; it’s a spiritual one. They have the same facts as any person could have about that last week of Jesus’ life on earth. But they still have not seen Jesus, not really. And if they haven’t seen Jesus, then they haven’t seen the Scriptures, not really. There is a circular logic here that is a closed loop to every person without the work of the Holy Spirit: if you don’t believe the Scriptures—here, the Old Testament—then you do not really believe in Jesus; and if you don’t believe in Jesus, you will not believe the Scriptures. Because it is Jesus, the Word of God, who speaks when His prophets speak. It is Jesus who speaks when His apostles speak. It is Jesus who speaks when His called and ordained servants speak according to the prophets and apostles. He says to some Jews, “You search the Scriptures because you think that in them you have life. But these are the ones that bear witness to Me. And yet you do not want to come to Me so that you might have life” (John 5). If the Scriptures do not testify of Jesus, then they are simply dead words, and they have no life in them. But if they speak of Jesus—if, as St. John says in the Revelation, “the testimony of Jesus is the spirit of prophecy”—then they give life, because Jesus gives life. Eternal life comes to those who call on the name of Jesus; but they will not call on Him without faith; and they will not have faith unless someone speaks the Word of Jesus to them; and they will not speak unless they are sent (Romans 10:12-17). But when they are sent, they preach; when they preach, some hear; when some hear, some believe; when they believe, they call on the Name of the Lord and are saved. Because faith comes by hearing and hearing by the Word of Christ. It’s what happens in Acts 2, when Peter preaches: those who received His Word are baptized. It’s what Peter says in his first letter: the Word of the Lord remains forever, and this word is the good news that was proclaimed to you. So it happens for these disciples: first, Jesus opens the Scriptures to them so that they see only Him; then He comes to their house, takes bread, blesses it, breaks it, and gives it to them. Then they see only Him in the breaking of the bread. And now home has suddenly shifted. They still live in Emmaus, but home is wherever Jesus is, and wherever His Body is. So they go back to Jerusalem at that hour, because in Jerusalem is where Jesus is going to give His Holy Spirit. Beginning from Jerusalem, the Apostles will be witnesses of His Resurrection, and they will proclaim in His Name repentance unto the forgiveness of sins. Now His Apostles are witnesses as Moses and the Prophets are. Now His Apostles proclaim the same repentance as Moses and the Prophets, all for the purpose of the forgiveness of sins. They proclaim a Jesus who is not absent, though He is not seen in the flesh. Between the Apostles and us, no one has seen Jesus in the flesh, but we have all eaten His flesh. His absence is not an absence.

And that is exactly what He promised. While we are going on our way, acting as if this world were our home, doing our theology about what it all means, wondering where Jesus is, and trying to see Him in the midst of the messes we have made; while we’re trying to take the Scriptures and make them fit our lives and interpreting all the things in all the Scriptures about ourselves, Jesus comes near to us. And do we recognize Him? Or do we say, “We had hoped that He was the one to redeem our lives. We had hoped that He was the one who would make our lives worthwhile, and meaningful, and fill our lives with significance. We had hoped that He would take away all our uncertainty and questions. We had hoped He would make everyone around us like us. We had hoped…”? When we leave behind the graves of our loved ones, how do we interpret that event? We had hoped that she would live a little longer? Jesus has come to interpret all of it for us by His death and His resurrection. He promises, “My Father will send the Holy Spirit in My Name, and He will teach you all things. He will bring to your remembrance everything I said to you” (John 14:26). He says to those Apostles, who were going to make disciples by baptizing and teaching them to keep everything Jesus said; to them and to the baptized believers, Jesus promises: “See—see!—I am with you all the days until the completion of the age.” Not “I will be with you,” but I am with you. He is right here, opening up to us the Scriptures, pointing us to Himself, to His suffering, death, and resurrection, to His glory. He is opening our eyes and our minds to understand the Scriptures, that they are all about Him. He has opened your eyes. Many of you, like St. Timothy, have known from infancy the Holy Scriptures, from your mother and grandmother, as Timothy did from his grandmother Lois and his mother Eunice. But not because the Scriptures, in themselves, give life—as if they were some sort of magic book. The Scriptures give life because these are the Scriptures which are able to make you wise unto salvation through faith in Christ Jesus, about whom they testify (2 Timothy 3:15). And because He speaks to you in these prophetic and apostolic Scriptures, your eyes have been opened to see Him in the breaking of the bread, as He gives you His Body and Blood. Now you can say, “Mine eyes have seen Thy salvation. You can let me go home at any time, Lord.” In His Words, in His Sacraments, is where He is during all the days of your journey in this age and this creation. It’s not dark yet, but it’s getting there. Fast falls the eventide. Nevertheless, He abides, He stays near, He remains, His Word remains forever, until we do finally see Him face to face; until we all leave behind our graves, and He, with the Father and the Spirit, comes and makes His home with us forever.