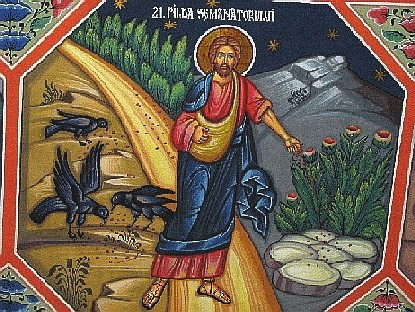 One week shy of being a pastor for ten years, and I still can’t read minds. I know, sad. But I would be willing to bet that I know what at least some of you were thinking as you listened to the Gospel reading from Matthew 13. While you were listening to Jesus’ parable about a sower sowing seeds and its explanation, at least some of you were evaluating what kind of soil you are, and whether you’re bearing fruit. Or if not evaluating yourself, then you were thinking of other people and what kind of soil they must be, and whether they bear fruit or not. That’s probably our more immediate inclination. But if we only go as far as considering whether we or others fit one of the categories of Jesus’ parable, or what it means for faith and salvation, then we are going to miss the wider point of Jesus’ parable.

Because Jesus is simply laying out the facts for us about what actually happens. Not what happens in farming, that much is clear. I’ve never heard of a farmer scattering seed everywhere, even on the road, in hopes that some of it might happen to find some good soil and grow. Seed costs money, and farmers need all the yield they can get. They’re not going to willingly waste the seed by scattering it anywhere and everywhere. So this is not quite a nice little story that tells us something nice about God. It’s not a homely story that helps us to understand things better, which is how we often think of parables. It is telling us the opposite of what we would expect, either from farming or evangelism.

Jesus is simply telling us what happens to His Word when it gets scattered over the earth. He will scatter seed anywhere. He will scatter the Word to sinners who don’t want to hear it, who reject Him, who want something different from Him. He just goes on His way, sowing seed. And what happens in the parable is what is actually happening at the time Jesus is telling the parable. He’s been telling people plainly what He’s there to do, who He is, who sent Him and why. He’s been showing them by miraculous works and signs. But He’s been encountering a lot of resistance. The Pharisees and scribes are trying to catch Him in His Words. His mother and brothers don’t seem to understand Him. Soon He will be rejected in His own hometown. Thus it is the Word is sometimes snatched up by the devil to keep people from hearing it and believing it. Thus it is that sometimes the Word takes a shallow hold, but suffering and persecution wither faith like the sun shining on a plant with no roots. People question God’s goodness and doubt His love because they cannot see it. They wonder why things happen to them, or why they are suffering, and they lose sight of the cross and resurrection and faith withers. Thus it is that sometimes faith is choked out by the cares of this life and the deceitfulness of riches as people believe themselves to be in control. Life is good and easy and they have everything they think they need, and faith slowly dies, being choked out by the slow inertia of idolatry and comfort. And sometimes, miraculously, the Word takes root, grows, and bears fruit 100, 60, or 30 times greater than what was sown. That’s simply the state of affairs when the Word goes out.

Now I tend to believe that Jesus and Matthew, by the inspiration of the Holy Spirit, meant these words to be in the order that they appear. So there’s a reason why the parable and its explanation are separated by nine verses. Maybe it’s actually that we are meant to hear those words in between the parable and its explanation. Maybe this is intentional. So we need to hear what Jesus says to His disciples when they ask Him why He’s speaking to the crowds in parables. In light of what has gone before, probably they are asking why He is now speaking to them in parables, when He spoke clearly before. And Jesus says to you it has been given to know the secrets of the kingdom of God, but to them it has not been given. Even more, to those who have, more will be given, even an abundance. But to those who do not have, even what they have will be taken from them. They don’t see, so the Word is hidden. They refuse to see, so they cannot understand. They do not believe Jesus, so it doesn’t matter how He speaks the Word to them. But those who believe Jesus will hear and understand His parables, which say the same thing that Jesus always says. Jesus says that what they’re seeing is the fulfillment of Isaiah’s message, that people would hear but not understand; see but not perceive; because their hearts are hard and dulled and their eyes and ears are closed to the Word. But if they were to see, hear, and understand, Jesus stands ready to heal them.

Blessed are you who hear and see and understand Jesus! And Jesus doesn’t stop scattering the seed—speaking the Word—just because people don’t believe. He is not discouraged and He does not give up. He scatters flagrantly, abundantly, recklessly. He says, you then, hear the parable of the sower. Hear My Word. It is for you. To you it is given to know the secrets of the Kingdom that Jesus reveals about who He is and what He does.

You then, hear the word. Here is a promise in the midst of the bad soil of this world. He’s scattered it among you and me. The promise is that God will have His harvest. Nothing will stop Him. Can the devil really thwart God’s will and stop Him from doing what He wants? Of course not. No matter how much of the Word the devil plucks up so that it is not heard, this is not a one-and-done thing. Jesus keeps speaking, keeps baptizing, keeps forgiving, keeps feeding. He will have His harvest. The devil thought he had plucked up the word once and for all when the Word made flesh was crucified and died. But it turns out that was God’s will all along, that the seed not remain alone, but die and rise up and bear much fruit. Not even death can stop Jesus from having His harvest.

Will persecution and affliction and suffering stop God from having His harvest? No. In fact, sometimes the blood of His saints waters the ground and makes it better and more fertile. We have a promise in the midst of evil that confronts us and happens to us that Jesus will keep giving us life until we experience it fully. He is the abundance in the middle of what looks like a barren field.

Will our comfort and affluence and apathy stop Jesus from gathering in His chosen ones? What about all the things that cause us worry and anxiety? A lack of money? Our doubts about whether God will do what He promises by the means He has promised to use? No, none of that can stop God from scattering His seed and gathering His Church. In spite of all of it—the devil, the world, and our own sinful flesh—God’s Name will be holy, His Kingdom will come, and His will will be done. Let Your Name be holy among us! Let Your Kingdom come among us! Let Your holy and saving will be done among us!

But you, hear His Word. And since you probably know one or two sinners who need that Word—in spite of what you think about the vehicle of its delivery—scatter the seed. It is not up to us to figure out some better method, some more efficient planting mechanism. Jesus has scattered His Word everywhere, even among us. He doesn’t stop, just because the devil takes it sometimes. He doesn’t stop because affliction sometimes withers faith. He doesn’t stop because people are sometimes deceived by riches and the cares of this life. We cannot do less in the places where He’s put us. And He will have His harvest, because it’s His Word, His work, His gathering and His Church. Blessed are you who see and hear and understand, among whom He has scattered His holy and life-giving Word.

In the Name of the Father and of the Holy Spirit. Amen. “And the peace of God, which surpasses all understanding, will guard your hearts and your minds in Christ Jesus” (Philippians 4:7, ESV). Amen.