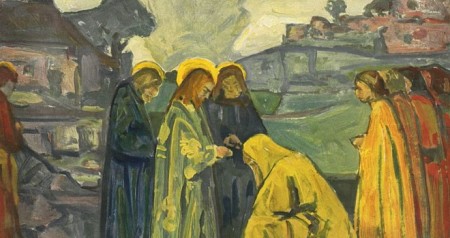 Matthew 15 takes place within that history. The Canaanite woman, daughter of Ham, comes to Jesus, the Israelite, the son of Shem. She cries out to Jesus, “O Lord, Son of David, show me mercy! My daughter is severely oppressed by a demon.” But Jesus answers her not a word. She keeps following Jesus and the disciples, keeps crying out. Finally, the disciples have had enough and ask Jesus to heal her daughter already, so that she’ll go away. But Jesus says to them, “I was sent only to the lost sheep, the house of Israel,” which echoes what He told His disciples in chapter 10: Do not go out into the way of the Gentiles, and do not go into the cities of the Samaritans, but go rather to the lost sheep of the house of Israel (10:5-6). But she keeps coming to Jesus, on her knees at His feet, in the posture of worship: Lord, help me! Finally, He speaks to her and says, “It is not good to take the children’s bread and throw it to the dogs.” She says, “Yes, Lord.” She agrees with Him. She knows who she is, where she’s from. And she knows who Jesus is. She knows she has no rights, no place or position to demand, to require, to expect, to deserve. She has no seat at the table of the children. Yes, Lord. For even the dogs eat the crumbs that fall from the table of their Lord. Anything will be enough.

Jesus has been feeding the children, literally and metaphorically. He has set a table for the children of Israel, who have seats at the table. As Paul says, to them belong the covenants, the promises, the patriarchs, the prophets, the glory, the law, the Messiah Himself according to the flesh. He’s fed them with the very word of God. He’s fed 5,000 with bread and fish. He’s about to feed 4,000 more. But like the pickiest children, they to whom everything has been given do not want the food with which Jesus feeds them. They complain and ask for something else. They do not want the food from the table of the Lord. Well, dogs—as always—are waiting under the table. What do they have by right? Nothing. But they will take anything. Yes, Lord. For even the dogs eat the crumbs that fall from the table of their Lord.

O woman, great is your faith. Let it be for you as you desire. And her daughter was healed from that hour. The greatness of her faith is that she knows who Jesus is, and she knows that out of His abundance there is enough even for the ancient enemies of God’s people, the Canaanites. Even from the table of Shem, some crumbs might fall to the servant-child of Canaan.

And so we come before the God of Israel. If God says no to our requests, to whom will we appeal? What rights do we have? What demands can we make? We who are of the Gentiles, much closer to Canaan than to David; we who are children of Ham, and not children of Shem. How often we despise the crumbs! But those who will take the crumbs find that it is the whole loaf. If the God of Israel refuses the Gentiles, what shall we say? But who is Jesus? He is the salvation of God, sent to the Jew first, and then the Gentile. Salvation is of the Jews, but the true worship takes place in Christ, not in Jerusalem, or Samaria, or Canaan. The Jesus who in chapter 10 tells His disciples to go only to the lost sheep of the house of Israel tells them in chapter 28 to make disciples of all the Gentiles, all the nations, by baptizing and teaching them. So that we who were of the wild vine are grafted into the true vine. We who were not a nation are made a nation. We who were not a people have become the people of God. The children of Canaan are made the children of David. We who are not even worthy of the crumbs are given a place at the table of the Lord. The Lord Yahweh, who gathers the outcasts of Israel, declares, ‘I will gather yet others to him besides those already gathered.’ For God has consigned all to disobedience that He may have mercy on all. Mercy me, Lord! Lord, help me! Even the crumbs are enough. And then the crumbs of words we hear become the full promise. The crumbs of bread and wine become the full feast in eternity. The crumbs we trust become the meal we see and taste and know is good. The Jesus who sometimes seems to turn a deaf ear to our pleas becomes the merciful God who heals every affliction.