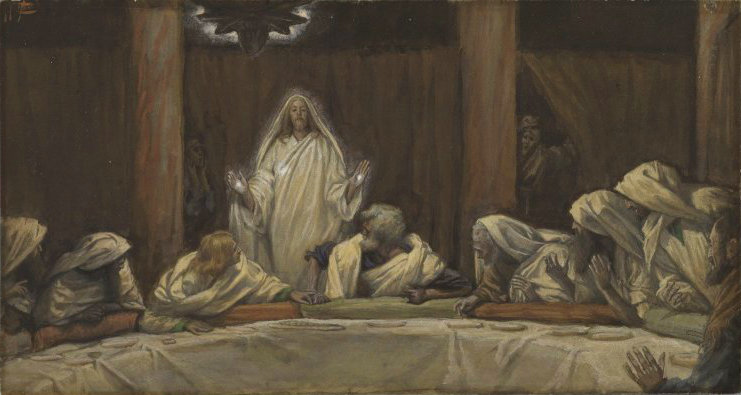 Audio of the sermon here.

In the Name of the Father and of the Son and of the Holy Spirit.  Amen.

“Make no mistake: if He rose at all/it was as His body;/if the cells’ dissolution did not reverse, the molecules/reknit, the amino acids rekindle,/the Church will fall.

It was not as the flowers,/each soft Spring recurrent;/it was not as His Spirit in the mouths and fuddled/eyes of the eleven apostles;/it was as His flesh: ours.

The same hinged thumbs and toes,/the same valved heart/that-pierced-died, withered, paused, and then/regathered out of enduring Might/new strength to enclose.

Let us not mock God with metaphor,/analogy, sidestepping, transcendence;/making of the event a parable, a sign painted in the/faded credulity of earlier ages:/let us walk through the door.

The stone is rolled back, not papier-mâché,/not a stone in a story,/but the vast rock of materiality that in the slow/grinding of time will eclipse for each of us/the wide light of day.

And if we will have an angel at the tomb,/make it a real angel,/weighty with Max Planck’s quanta, vivid with hair,/opaque in the dawn light, robed in real linen/spun on a definite loom.

Let us not seek to make it less monstrous,/for our own convenience, our own sense of beauty,/lest, awakened in one unthinkable hour, we are/embarrassed by the miracle,/and crushed by remonstrance.”  (John Updike, “Seven Stanzas at Easter,” Verse [Greenwich, CT: Fawcett Publications, Inc., 1965], 164-165)

Make no mistake: if He rose at all, it was as His body.  “Touch Me and see, that a spirit does not have flesh and bone, as you see that I have” (Luke 24:39).  “‘Do you have anything to eat here?’  And they gave Him a piece of broiled fish, and, taking it, He ate it in front of them” (Luke 24:41b-43).  Spirits don’t have hands and feet, flesh and bone, and they certainly don’t eat fish!  In whatever glorious ways Jesus’ body is different from when “He was still with [them]” (24:44), it is still a body.  It is still His body.  “It was not as the flowers, each soft Spring recurrent; it was not as His Spirit in the mouths and fuddled eyes of the eleven apostles; it was as His flesh: ours.”  In whatever glorious ways our bodies will be different from how they are now, they will still be bodies.  They will still be our bodies.

The disciples doubted. Their reasoning, in light of everything they had ever seen or experienced, led them to conclude that such a thing—Jesus’ standing before them, crucified but risen—was impossible. First they doubt, and Jesus says, “Touch and handle and see.” And this is what they apparently did, because John, in chapter one of his first letter (which we heard last week) says that the Jesus whom they touched with their hands, to whom they listened, and whom they saw—that same Jesus is the eternal life from the Father and that same Jesus is the Jesus whom the Apostles and all the Church proclaims in joy forever. The only way that this reasoning doubt can be overcome is by the Word that has been proclaimed to us: Jesus is actually, physically, finally risen from the dead.

We do not confess the resurrection of the soul, but the resurrection of the body.  And notice that we confess the resurrection of the body particularly in our baptismal creed, the Apostles’ Creed.  The Apostles’ Creed is the outline of the Christian’s life, from creation to resurrection.  From “I believe that God has made me and all creatures” to “[the Holy Spirit] will at the Last Day raise up me and all the dead, and give unto me and all believers in Christ eternal life” (Small Catechism, Creed 1, 3).  And right in the middle, at the heart of our faith and life is Jesus Christ, “who has redeemed me, a lost and condemned creature, purchased and won me from all sins, from death, and from the power of the devil; not with gold or silver, but with His holy, precious blood and with His innocent suffering and death.”  And why has He done this?  “that I may be His own, and live under Him in His kingdom, and serve Him in everlasting righteousness, innocence, and blessedness, even as He is risen from the dead, lives and reigns to all eternity.  This is most certainly true” (Small Catechism, Creed 2).

It is at baptism that the Creed speaks no longer in generalities, in broad terms, of true but distant realities.  At baptism, the Creed speaks in specifics, focused on one, individual, lost and condemned creature, of a true and very near reality: “You were created by God, along with the rest of His creation.  He is the source of everything you have.  You, a lost and condemned creature, were redeemed by the Son’s precious blood and innocent suffering and death to be His own and live under Him in His kingdom; because He is risen from the dead and lives and reigns to all eternity, you also will rise from the dead and live forever.  Until then, you are a member of Christ’s holy Church because the Holy Spirit has called, gathered, enlightened, and sanctified you by the Gospel and the Gifts; in this Church your sins, along with the sins of all believers, are daily and richly forgiven.  On the Last Day, God will raise your body, along with all the dead, and give you who believe in Christ eternal life.”  Thus spoke the Voice of God at your baptism, and thus He reaffirms His promise as often as you hear His Word.  When the vast rock of materiality, in the slow grinding of time, eclipses for each one of us the wide light of day, we will have nothing to fear.  There will be nothing that can keep that rock in its place when the glory of the crucified and risen Lord breaks open the graves of all people, and those who have heard, read, eaten and digested the Word of the living God, and eaten and drunk the life-giving Body and Blood of the living Son, and have been kept in the true faith by the living Spirit, will be given new, sinless life in a new, sinless creation.  And when this old creation gives way to the new, we will live forever in our bodies with the eternal Trinity and everything will, once again, be very good.

That is the full, robust, bodily, Faith to which Jesus opened the disciples’ unbelieving eyes and minds, just as He opens our unbelieving eyes and minds; the Faith they heard and touched with their hands and saw with their eyes, even as we see and touch and taste.  It is the Faith of Moses and the Prophets and the Psalms; the Faith that is written on every page of the Scriptures; the Faith that has been proclaimed to all nations, of which the Apostles were witnesses, beginning from Jerusalem.  And it is the Faith that is still proclaimed in every corner of creation; when and where He wills, God’s Spirit sparks repentance and delivers forgiveness of sins in the Name of Jesus-who was really crucified and really raised: because, “if the cells’ dissolution did not reverse, the molecules reknit, the amino acids rekindle, the Church will fall.”

But God would not let His Holy One see decay, and so the Church stands forever, bearing witness in the world, even through you and me, to the Lamb who was slain to take away the sins of the world.  We rejoice this morning and every morning in that full cross and that empty tomb; see what kind of love the Father has given and still gives to us! that we should be called children of God—we are!—because we have been born of the imperishable seed of Jesus (1 John 1:1, 9).

In the Name of the Father and of the Son and of the Holy Spirit.  Amen.  “And the peace of God, which surpasses all understanding, will guard your hearts and your minds in Christ Jesus” (Philippians 4:7, ESV).  Amen.