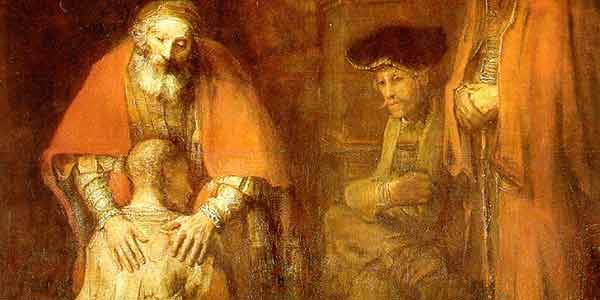 What kind of father is this, anyway? Calling him “generous” would be putting it nicely. Actually, he’s generous to a fault. First he has a fire sale, selling off his property, or cattle, or flocks, and then he gives half the proceeds to a son who, apparently, wishes the father was dead because he wants the inheritance now. Then he lets his son go off to some distant, godless country to do who knows what, from the father’s perspective. It’s like a scene from a movie where the main character has a drink in one hand and is surrounded by beautiful people, all laughing. But slowly the room starts to spin, and everything slows down, and, at the end, he’s by himself, at his lowest point.

For the younger son, that point is out in the field with the pigs: the son of a wealthy Israelite, not only feeding unclean animals, but wanting to eat their food as well. About as unclean as it gets. Out there in the field, he “comes to himself.” All the shine and glitter has been taken off his life, and he finally realizes it was all for nothing. What did all that prodigal living get him? Now, out there in the field, he doesn’t think his father will be generous enough to take him back, so he decides to make a bargain that will at least put food in his stomach. But when he’s still a long way off, his father sees him and runs out to him; no son of his is going to be seen like that, ragged and dirty and smelling like swine! He won’t even hear the bargain or the excuses; he tells his slaves to get the best robe and put it on him, and put sandals on his feet, and the ring of the family back on his hand, and to kill the fattened calf; we must celebrate, because this son of mine was dead but is alive again; he was lost, but he is found. So they go in and begin to celebrate.

Jesus doesn’t actually have to tell us what the reaction of the older son to this is going to be. We could guess just as easily. We see it in our families: you’re just enabling; you’re just giving him permission to go and do it again tomorrow; you’re just allowing her to abuse your good gifts. Generous to a fault. When the older son finds out why there’s a party in the middle of the day, while he’s out working in the fields, he gets angry and refuses to go in. So his father comes out to him, trying to get him to come in. “Look, I’ve slaved for you all these years. I’ve never broken your rules. I’ve always done what you’ve told me. and you’ve never even given me a little goat to celebrate with my friends. [Despite the fact that we already know that the father divided the property among them, meaning both the calf and the goat were his already!]  But when this son of yours comes, who’s devoured your property with prostitutes, you kill the fattened calf. You take him back, no questions asked, as if nothing had ever happened; as if everything is exactly the same as before he left.” But the father says, “No! Nothing’s the same! Everything’s changed, because this brother of yours was dead but is alive again; he was lost but he is found. We had to celebrate.”

But the older son thinks his father is generous to a fault. He knows what we know, that the younger son squandered his inheritance; he wasted his father’s wealth; he despised the gifts of his father. That’s obvious. But there’s more than one way to despise the gifts of the father. Outwardly, the older son appears to deserve anything he will get. He’s worked hard, stayed on the farm, done everything his father has asked him to do. He’s a good, Christian, young man. No doubt the father had his neighbors and friends nodding approvingly, telling him what a responsible son he had raised.

But in reality, the older son is not too different from the younger son; he despises the gifts of his father, because he no longer thinks of them as gifts. He deserves them, especially in comparison to that younger son. He wants them for himself. He doesn’t want to celebrate in the father’s house; he wants to have fun with his friends. And more than that, he despises the love of the father for all his children. And what about us? Take any given congregation—take this one, for example. As we look around, we can see both prodigal younger sons and prideful older sons.

There are the prodigals, the ones who have despised the gifts of God in wastefulness. That’s what prodigal means: wasteful, reckless, profligate. Maybe the ones who sin all they want on Saturday night, and come in and confess it all on Sunday morning. The ones who have taken the robe of Christ’s baptismal righteousness and dragged it through the mud; who have taken the forgiveness of God for granted, using pious words to cover the sins we want to keep; who rarely, if ever, come to the Father’s house.

But there are also prideful older sons. Probably most of us fit that, because we have always been here, doing what the Father has asked us. I mean, I’m a pastor, right? And what really gets us, what really sticks in our craws, is that God will take anyone back. Not just that He takes them back, because, of course, we’re all sinners—I feel like I’ve said that somewhere else recently—but that He takes them back, no questions asked, as if nothing had changed since the day of their baptism. He just throws His grace out there and lets it be abused. As one writer put it, “For no matter how much we give lip service to the notion of free grace and dying love, we do not like it. It is just too…indiscriminate. It lets rotten sons and crooked tax farmers and common tarts into the kingdom, and it thumbs its nose at really good people. And it does that, gallingly, for no more reason than the Gospel’s shabby exaltation of dumb trust over worthy works” (Capon, Kingdom, Grace, Judgment, 446-447). The prideful and the prodigal, maybe some of both in each of us.

But, you know, I’ve heard another story about another prodigal, another Son. This Son left His Father’s House, and He took not just half of the wealth, but all of it. He took it and went into a distant, pagan, unbelieving country, and He squandered it there, even wasted it, on the ungrateful, on prostitutes and adulterous women, on liars and thieves and tax collectors; on fornicators and abortionists and homosexuals, on any random sinner who might want to be free of his sin. Solomon says, “If a man offered for love all the wealth of his house, he would be utterly despised” (Song of Solomon 8:7, ESV). And He was. There, at His lowest point humanly speaking, lifted up on the cross, which was a curse, about as unclean as it gets—there His friends all abandoned Him, even His closest ones. And all they gave Him were nails, spear, and thorns, and vinegar to drink. And He died there, hungering and thirsting for your salvation. But He rose from the dead and returned to the Father, who had sent Him, in all the glory of the Son. And He was welcomed back with rejoicing by the servants of God.

To the world, it looks like our God is generous to a fault, like He’ll take anyone. “For our sake He made Him to be sin who knew no sin, so that in Him we might become the righteousness of God” (2 Corinthians 5:21, ESV). “If He did not spare His own Son, but gave Him up for us all, how will He not also, with Him, graciously give us all things?” Today, if you have been prodigal, taking the grace of God for granted, today the Father is running out to meet you. He wants to put that first and finest robe back around you, the robe of your baptism. He wants you to come in as His son, as His daughter, and celebrate; eat and drink. If you have been prideful, standing outside angrily, the Father comes out to you also.

And if you hate that He’ll take anyone back, as if nothing has changed, He says, “No! Everything’s changed! My Son was dead but He is alive!” He says, “You are always with Me, and everything I have is yours. But we have to celebrate; if I am your Father, than these are your brothers and sisters. ‘Be merciful, even as your Father is merciful’” (Luke 6:36, ESV). Come in and celebrate; eat and drink with the Family. And if you have never been part of the Family, if you have been standing outside like a stranger or a slave, come in and ask one of the Father’s servants—this is the best place to hear about everything the Father has for you, how He runs to you in mercy and love, how He wants to clothe you in this robe of baptism, and put the ring of the Son on your finger, and how He wants you to come in and celebrate, eat and drink around His Table with His sons and daughters.

If a man offered for love all the wealth of His house, he would be utterly despised. But not by you, not anymore. “For you know the grace of our Lord Jesus Christ, that though He was rich, yet for your sake He became poor, so that you by His poverty might become rich” (2 Corinthians 8:9, ESV). It is fitting for us to celebrate, for the Son was dead but is alive; you may have lost Him for a time in this world, but you always know where He has promised to be found: in His Father’s House. It is fitting to eat and drink with angels and archangels and all the company of heaven, until that day when we see the Father face to face and He brings us into His house with His Son in the eternal communion of the Holy Spirit; until He brings us in forever, safe and sound and celebrating.