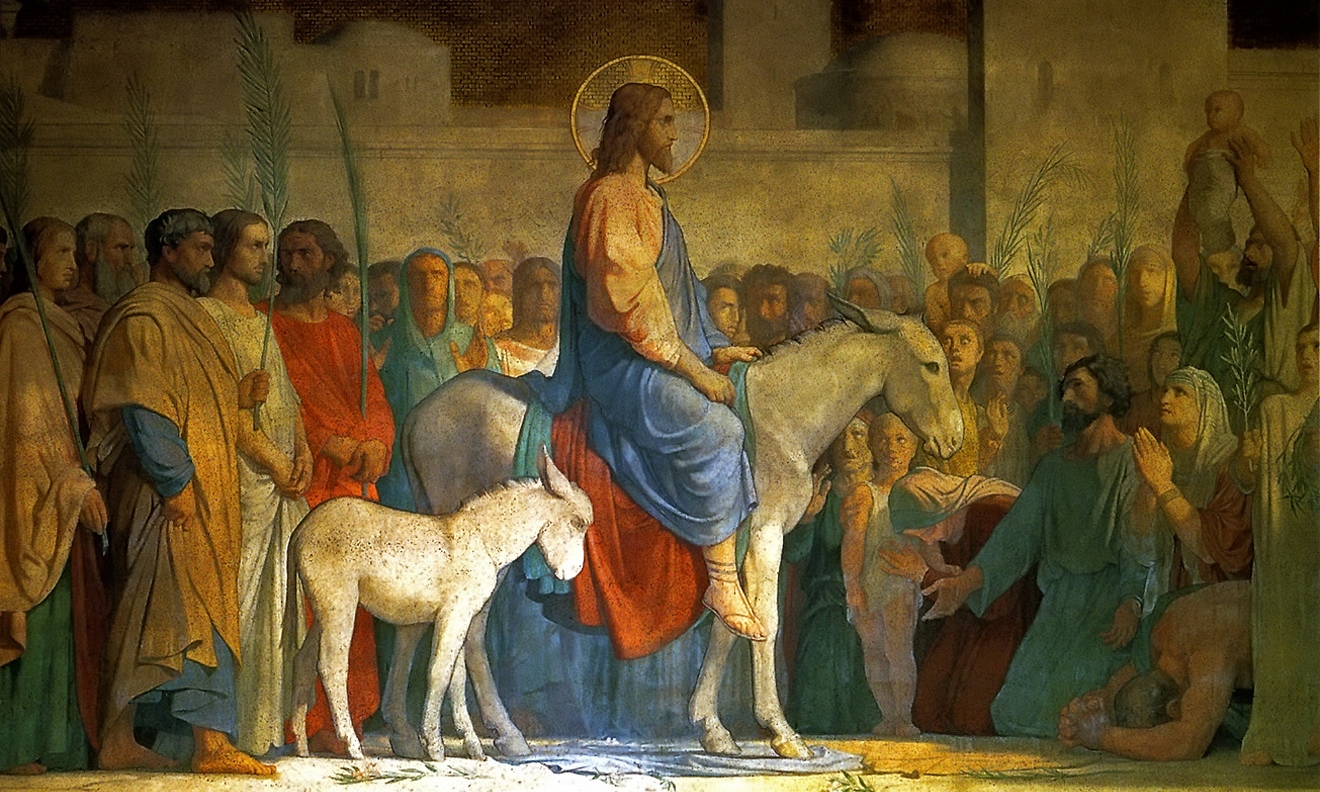 But when Jesus enters the wilderness of this world, enters the flesh of Adam Eve and you and me, He doesn’t exalt Himself. He doesn’t come, at that time, in all the glory of His Father, with angel armies, to destroy all the enemies of God. He doesn’t come, at that time, with the winnowing fork in His hand, to clear away the chaff from His threshing floor. He doesn’t come, at that time, for judgment and condemnation and wrath and destruction. He comes humbly, riding on a donkey, righteous and bearing salvation in Himself. He humbles Himself to the lowest place—a King appearing as a pauper—and takes on the likeness of sinful flesh, with all its weaknesses and burdens. He hides the form of God that terrifies and silences and kills, the glory that no man can see and live, and He appears in the form of a man, hiding the glory under flesh and blood, bones and skin, in the appearance of a slave.

When Jesus appears in Jerusalem on that first day of the week, the people are certainly ready for a king to overthrow their enemies; they view it as a triumphal entry: Blessed is the King who comes in the name of the Lord! Now, finally, we can be done with all of our humiliation and weakness, and be exalted to a place of power and control and glory, as we should be. But Jesus knows that the glory of God and of God’s people in this world will never look like that. He rides into Jerusalem, not to take over the earthly power, but for the last few steps of His humiliation, to be humbled to the point of death on a cross.

The Son of God goes forth to war, because there is no other who can fight this fight. He knows the gods of the nations are nothing, who cannot deliver, who cannot act, who cannot save. He comes to vindicate His people and comfort His servants, though none of them look to Him for deliverance. But He sees the failure of all their gods. He sees that their strength is exhausted, that they are all fallen, that they are nothing. He says, “Where are your gods? Where are all the people and things in which you put your trust, to which you poured out your sacrifices and offerings of time, money, and energy? Will they deliver you? Can you take refuge in them?” He says, “See that I, I am God and there is no other. I alone kill and make alive. I alone wound and heal. There is none who can deliver out of My hand.”

If God judges, if God condemns, if God holds you accountable for what you have done and left undone, to whom will you appeal? To what higher court will you look? Who can deliver you out of His hand? Death reveals every idol for what it is, a worthless, helpless thing that has no power. What politician, what government, what amount of money, what person will deliver you from the consequences of your actions in this world, from sin and death? They will, every one of them, be exposed for what they are, by their death or by yours. If it is not the God who has made all things, then it is no God at all, and its failure will be obvious, sooner or later.

But when the Son of God goes forth to war, He doesn’t go with armies and weapons. He doesn’t go out against you, or me, or any of the people who exalt themselves as autonomous individuals, who do not need a deliverer. He doesn’t fight against those who say, “I will choose; I will set the course of my own life; I will decide what is right and wrong; delayed judgment means no judgment at all.” No, He goes to war in our own flesh, under our own weakness, right in the middle of sinners, doubters, idolaters, unbelievers. He goes to war on a donkey, and He rides out in victory on a cross. He conquers helplessly on a cross. A kingly crown to gain, yes, but one woven out of thorns. Clothed in the purple of mockery, hailed by spit and fists.

Jesus, the Son of God, goes forth to war and becomes the greatest satire there ever was. Satire is taking a thing to its extreme in order to expose its absurdity. So Jesus says, “There’s sin running rampant in this world? Corruption, lies, hate, murder, violence? I will expose it for what it is by becoming sin itself, in My own body. You say that death is the end, the final word, which everyone is trying to avoid? I, the eternal Son of God, will take on flesh and die. You think that God, if He exists, has abandoned and forsaken this world and you? I will be forsaken and abandoned. You see that all gods fail, so you believe in none? Then I will fail. I will hang there silent, unmoving, helpless; I will die and it will appear as if I am just one more failed god.”

But there is one thing that sin, death, the devil, along with every single thing in which people put their trust—one thing that none of them can do: they cannot give life, and they cannot heal. If Jesus simply dies, if that cross and grave are the end, then He is no God, and you must not worship Him, you must not hear Him, you must not follow Him. But one week after his untriumphant entry, on the first day of the week, that same Son of God, who died in His flesh, appears to the disciples in that same flesh, resurrected and glorified. And He says, “Look, see that I am He (Luke 24:39)! There is no other God. Look at My hands; look at My feet. Do not be afraid; I am He; and who can deliver you out of My hands?”

Jesus takes sin and death to their full and final conclusion and, in His resurrection, demonstrates their absurdity. Who will deliver you now from His hands? What will separate you from Him? Sin? Death? The devil? No. He is God and there is no other. See what He does! He humbles us to the point of death, but it is only so He can kill our sinful flesh and make us alive in Jesus. He wounds our pride and destroys our idols, but it is only so He can heal us forever. This is His mind, the way that He thinks, how far He is willing to go for us. This is the mind of Christ, which you have been given toward each other, to think His thoughts and serve your neighbor. But what we continue to practice and try and fail, and try again is what He has done fully and perfectly and completely.

And so, this week, again, regardless of where we are and how we listen, our God still goes forth to war. We will see and hear how He fights for us and against all our enemies; as He is humbled to the point of death. But that humbling according to Paul is also His exaltation according to John. In Christ, the highest is brought low and the lowest lifted up. Glory to God in the lowest! And then, mystery upon mystery, God exalts the Man Jesus to the highest point. The Son who had the Name of God from eternity, now has the Name according to His flesh. Even in His flesh He will come and every mouth will confess Him and every knee bow before Him. We will see that He alone, the crucified and resurrected one, is our God; it is His flesh and blood we have eaten and drunk and will eat and drink again. He becomes death to kill our death; and He rises as our resurrection. Ride on, ride on in majesty! Ride on in lowly pomp to die! O Christ, Thy triumphs now begin o’er captive death and conquered sin! (LSB 441:2).