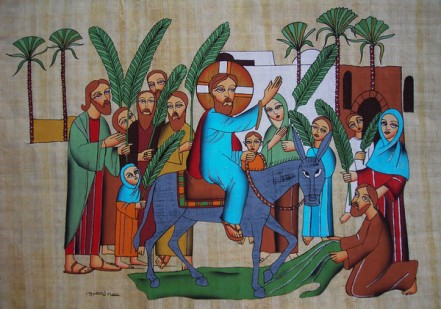 Sometimes we have those moments that seem to move differently from other times. It happens, I think, in times of tragedy. Time may continue moving for everyone else, but for us it seems to stand still. And maybe it happens for children during the time before Christmas. The anticipation builds as the day gets closer. For me, that time looked like candlelight; it smelled like pine; it felt like warmth in the midst of the cold. And like one particular Christmas Eve. It was just my mother and me, at an 11:00pm candlelight service, which don’t seem to happen too often any more. I remember leaving the service and watching the clock change from 11:59 to 12:00, watching the calendar change from December 24 to December 25. And time just seemed to move at a different rate; it seemed outside of normal time. Now maybe this only works for children. Maybe adults, we know too much. Maybe we have too many things to do, too many responsibilities. We might like to recover the nostalgic memories of our childhood, but we can’t quite do it.

And yet, we come to this place today, and we find ourselves removed from the time in which we normally live. While the world moves quickly through the holidays to the end of the year, the Church begins its year. For the Church, time doesn’t move simply from year to year, but it moves repeatedly through the life of Christ, until He comes. And especially today, the First Sunday in Advent, we are taken out of our preparations for Christmas, out of buying things, wrapping things, preparing things, baking things, traveling, family, and everything else that we associate with this time of the year (none of which is bad, of course), and we are taken from the time before Jesus’ birth to the week before His death. We are taken from Advent to Palm Sunday. We do not hear about Zechariah and Elizabeth and the infant John, or about the angel speaking to Mary and Joseph about the infant Jesus; instead, we hear Jesus tell His disciples where to find a donkey, and what to say when someone asks them why they’re untying it. We watch as they bring the donkey and put their cloaks there for Jesus to sit on. And we watch as He rides in to Jerusalem over more garments and branches on the road. We listen as the crowds sing their psalms: Hosanna! Save us now! Blessed is He that comes in the Name of the Lord! Blessed is the coming Reign of our father, David!

Have you ever considered those words? “The Reign, the Rule, of our father, David.” What’s behind those words? A thousand years of an unfulfilled prophecy. A thousand years of waiting. A thousand years of praying. A thousand years of longing for God to fulfill His promise to David. It goes back a thousand years to 1 Samuel 7, when David tells the prophet Nathan that he wants to build a house for God’s presence. Nathan says, “Go ahead.” But that night God tells Nathan that David will not build a house for God. What need does He have of a house? His presence had been in a tent since the wilderness. God speaks to David through the mouth of Nathan: “You will not build Me a house; I will build you a house. I will raise up your offspring after you, who will come from your own body, an I will establish his throne. He will build a house for My Name. I will establish his throne forever; your throne will be established forever.” Maybe David and others thought that God meant Solomon. Solomon built an impressive temple, where God would put His Name, so that whoever prayed to Him there, whoever looked toward Him there, God would hear and forgive. And Solomon’s kingdom was the largest in the history of Israel. But Solomon’s throne was not established forever. In fact, Solomon’s reign was the beginning of the end. It was because of Solomon that Israel was divided, and eventually was exiled. He brought idolatry into Israel and built idols for the gods of the nations, and his kingdom and temple were destroyed. The throne of David looked like the stump of a tree. And when the people came back from exile and rebuilt the temple, those who had seen Solomon’s temple wept because the new temple paled in comparison.

No, Solomon was not the fulfillment of the promise to David. It was not Solomon’s throne that was established forever. The people waited and waited, for a thousand years, until a man rides into Jerusalem, and they say, maybe now. Maybe He is the one who will restore the reign of David. Maybe it will be in Him that God will keep the prophecy of Amos, that He would rebuild the fallen booth of David. Maybe a shoot has finally come from the stump of Jesse. Maybe God has finally sent a new David to shepherd His people Israel. And He had. He did. But not in the way they might have expected, with military might and a powerful earthly kingdom. Instead, this King would reign from the cross. So what does He do? He comes in the Name of Yahweh, and He goes into the earthly temple, the place of God’s forgiving presence with His people. He looks around at everything, and then He goes out again, goes out, finally, to the cross, and through death and into the resurrection.

Because this is the way that this King must travel. So Advent does not prepare us so much for Jesus’ birth, or even for the celebration of His birth, as it brings us again onto the way that Jesus travels in this world. We travel with Him, because we have been joined to Him in baptism. Where He goes, we go. All of us, homesick for a home we have never seen. None of our nostalgia, none of our traditions, none of the emotion and anticipation can ever quite live up to the hype. We can never recapture those fleeting moments of time outside of time. We have had joy, but we can never quite get it back again. And so our homesickness continues. We continue to travel on, as the Church year shapes us according to the life of Christ, from His conception to birth, to death and resurrection, to ascension and the sending of the Holy Spirit, and on in to the life of Christ as He gives it to us in the life of the Church. So many have traveled this way before us, so many like Bartimaeus. You remember? The blind man between Jericho and Jerusalem, as Jesus travels the road laid out for Him. The blind man crying out, “Jesus, Son of David, have mercy on me!” And Jesus says, what do you want Me to do for you? And Bartimaeus says, I want to see. So Jesus says, Your faith has made you well, go on your way. But where does Bartimaeus go? Where does his way lead? “Immediately, he regained his sight, and he followed [Jesus] on the way.” No more separate life, no more normal passing of time. Bartimaeus goes where Jesus goes: to Jerusalem, to the temple, to the cross. Jesus has made a house in His own flesh for the Name of God. And now there’s no other place to go but to Him, because He is where God’s full Presence dwells for the forgiveness of sins.

So we are here on the way of Jesus, like Bartimaeus. We come in here and we are in a place outside of time, where time moves differently, according to the life of Christ. Here time and place are no obstacle to Jesus, because He is risen from the dead. Here He meets us in a taste of eternity, with angels and archangels and all the company of heaven. Here we sing with those crowds, “Blessed is He who comes in the Name of the Lord! Hosanna! Deliver us now!” And He hears, and He forgives, and He feeds us for our journey along the way, until He is revealed to our newly open eyes, and He leads us home.