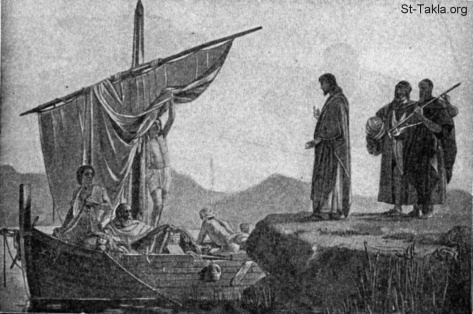 “Yet forty days, and Ninevah shall be overthrown!” (Jonah 3:4, ESV). “This is what I mean, brothers: the appointed time has grown very short” (1 Corinthians 7:29, ESV). “The time is fulfilled, and the kingdom of God is at hand; repent and believe in the gospel” (Mark 1:15, ESV). This is the urgent call of God to sinners; though unlike in the time of Jonah, we have no timetable. Whether the call is to sinners who already trust that Christ’s forgiveness is for them, or whether it is to sinners who remain in their sin, the call is the same: “repent and believe in the gospel.” It is the same to you today: repent. Turn against your sin. Confess it, which means to say the same thing that God says about it: it is damnable. You are damnable. I am damnable. Our confession of sin is not mere ritual: I, a poor, miserable sinner. “Miserable” according to the Latin: wretched, and in need of God’s pity. I justly deserve the temporal and eternal punishment of God for what I have done and left undone; my thoughts, words, and deeds are altogether worthless in the sight of God, and full of sin. What’s more, repentance, though it is commanded of sinners, is not something sinners can accomplish in themselves. Jesus’ word, repent, is not primarily about how we are to make ourselves feel or what we are to accomplish in our own hearts. It is a word that, like all of God’s words, creates what it calls for. When God said, “Let there be light,” His Word created light. When God said, “Let the earth bring forth vegetation,” His Word created both the earth and the vegetation. The Word of God creates what it calls for. So with repentance. The command to repent is a word that creates either repentance or defiance. In between repentance and defiance is the mystery of the Holy Spirit’s work.

Likewise with the words, “Believe in the Gospel.” “Dead in sin” means the same thing before God that just “dead” means before the living. Neither the dead nor the dead in sin can do anything to change their status. So the Gospel brings life to the dead, because the Gospel is the living Jesus coming to the dead. That Gospel of Jesus, which it is salvation to believe, is also the Word that creates belief. And that is always a miracle, no less than the creation of light and earth and grass and animals. It is a miracle that follows repentance; or, rather, the completion of repentance. It is a miracle that occurs even in the hardest of hearts; even in people such as the Ninevites, who impaled their enemies on poles and cut unborn children from their mothers. Even they, against every human expectation (and every hope of Jonah!), heard of the wrath of God against sin and cried out for mercy. Only the miraculous word of Christ crucified can make brothers and sons sitting in a boat into brothers of Jesus and sons of His Father, or change fishermen into fishers of men. There is simply no other explanation for leaving behind jobs and families for an uncertain future, except that the One whom they follow has reordered and recreated everything. There is no reason, other than Him, that we should be in this place; that we should be listening to the words of a Man who has not been seen physically on this earth for two millennia; that we should be taking Him at His Word that He gives us His own Body and Blood to eat and drink. None of that makes any sense unless Jesus’ life, death, and resurrection are the crux of all time, unless the cross-shaped center of all life and all existence is also the center of your life and your existence. This Man who walked on the shore of a lake in Galilee, even now walks among and calls sinners to Himself, just as He called Andrew and Simon, James and John. God has called you by His Holy Spirit through His Word to be a follower of His Son, Jesus. God called your name, called you out of the devil’s kingdom into His own. In the baptismal blood of Jesus, He washed you clean of everything that separated you from Him, and you followed Him. Consider all the intervening months and years: how in the world did you get from that call and that baptism to here? Perhaps the disciples, whom Jesus called from their work alongside the lake of Galilee, asked themselves similar questions. What made me follow this Man? What made me trust His Word, rather than some other word? Who am I, that I should receive this grace?

But here you are. And what He said to those disciples is His Word to you as well: “Come after Me, and I will make you to become fishers of people” (Mark 1:17). Or, maybe, “I will make you to become mothers and fathers of people; or electricians, or orchardists, or teachers of people.” He is making you what He calls you to be. But He does not call you away from your families or your jobs like He called those disciples away from their nets, except in this way: when you follow Jesus, you leave any claim to your life as your life. “You are not your own” (1 Corinthians 6:19, ESV). “This is what I mean, brothers: the appointed time has grown very short. From now on, let those who have wives live as though they had none, and those who mourn as though they were not mourning, and those who rejoice as though they were not rejoicing, and those who buy as though they had no goods, and those who deal with the world as though they had no dealings with it. For the present form of this world is passing away” (1 Corinthians 7:29-31, ESV). There is no time for acting as if the things of this world have any real claim on you. Your job, your purchases, your mourning, your rejoicing, even your wife or husband are put in their place by the Christ who has put you in your place—that is, behind Him. St. Paul is not talking about divorcing your spouse; or cultivating a stoic, unfeeling persona; or cutting yourself off completely from this world so you are not tainted or infected with its evil. That is the opposite of everything the Scriptures teach about marriage, and this creation, and living in a world in which we cannot help but live. It is really nothing more than refusing to be of, to belong to, the world. Here, we mean the world as that which is opposed to God and His Christ. “If you were of the world, the world would love you as its own; but because you are not of the world, but I chose you out of the world, therefore the world hates you” (John 15:19, ESV). “Do not love the world or the things in the world. If anyone loves the world, the love of the Father is not in him…And the world is passing away along with its desires, but whoever does the will of God abides forever” (1 John 2:15, 17, ESV).

So, here you are, in this world and this congregation, with this husband or this wife, these children, this job. And in these places, with these people, Jesus is making you, stretching you, forming you into a person who is salt, who is light, who is prepared to give a defense to anyone who asks for a reason for the hope that is within you (1 Peter 3:15). You have been fished out of the condemned world and caught up in the net of the Gospel, which has spread from the Galilean lake all the way around this planet. The Seed in the manger of Bethlehem has exploded into bountiful and glorious life, and He is at work in you and in all His fishers, fathers and mothers, electricians, orchardists, and teachers, to gather up everyone He can in the bright branches of His eternal reign. You do not have to leave your given position and travel to another country to tell people about the Jesus who died for them; God has put you here to do that. The Son of God has called you out of the world, to follow Him wherever He goes; but you are not floating around in the stratosphere, immobilized in anticipation of His return. He has put you back into the world—not as you were before, following the world’s priorities, goals, and desires—but as His own dear child, repentant and forgiven. If you know who you are in Jesus, then you know what God wants for everyone whom the Gospel’s net has not yet caught. That is the urgency of the Gospel, but the urgency is God’s. He is urgent to save because the time of salvation is always now. Do not confuse, though, the Spirit’s ever-urgent call through the Gospel with what God has given us to do. He has not called us to save anyone; we can’t do that anyway. But be urgent in prayer for those whom God continues to call. Bring them to Jesus so they can hear His call, and then He will make them what He calls them to be. This is what Epiphany is all about: Jesus spreading His Light, His reign, preaching repentance and the forgiveness of sins through His followers. Miraculously, He does it through people who would destroy everything if it were not for His Spirit. Miraculously, He does it even through preachers like me, even through people like you with all your various vocations. Lord, have mercy! Praise to You, O Christ! Alleluia!