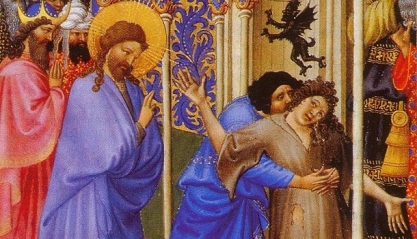 In Mere Christianity, C.S. Lewis famously wrote, “I am trying here to prevent anyone saying the really foolish thing that people often say about Him: ‘I’m ready to accept Jesus as a great moral teacher, but I don’t accept His claim to be God.’ That is the one thing we must not say. A man who was merely a man and said the sort of things Jesus said would not be a great moral teacher. He would either be a lunatic—on a level with the man who says he is a poached egg—or else he would be the Devil of Hell. You must make your choice. Either this man was, and is, the Son of God: or else a madman or something worse. You can shut Him up for a fool, you can spit at Him and kill Him as a demon; or you can fall at His feet and call Him Lord and God. But let us not come with any patronising nonsense about His being a great human teacher. He has not left that open to us. He did not intend to” (Mere Christianity, 56).

Lewis didn’t write those words about the Gospel of Mark in particular, but that is a pretty good summary of what happens in Mark’s Gospel. In chapter 3, Jesus’ own family comes to find Him in the middle of a large crowd, pressing in on Him so that He can barely move. They come to seize Him and take Him away. They are saying, “He is out of His mind.” He is beside Himself. He doesn’t know what He’s doing. They come to save Him from Himself. Not too much later, in the same chapter, the scribes—who probably know the Scriptures better than anyone, and should know that Jesus is the fulfillment of the Scriptures—they say that Jesus has an unclean spirit. He has a demon, they say. The same sort of unclean spirit that Jesus casts out of the man in the synagogue here in chapter 1. But Mark is very clear: the Jesus he preaches is not crazy, nor does He have a demon. The Jesus Mark preaches is the Son of God. It begins in the very first verse: “The beginning of the Gospel of Jesus Christ, the Son of God” (1:1). Not very many verses later, Jesus is being baptized by John in the Jordan River, and God the Father speaks from heaven: “This is My Beloved Son, with whom I am well pleased.” But it’s interesting and sort of strange that, besides Mark and God the Father, Jesus is only called the Son of God twice more in the Gospel. In chapter 5, Jesus is about to cast out more demons, and the demon speaks and says, “I know who You are; You are the Son of the Most High.” And in chapter 15, at Jesus’ crucifixion, a pagan, Roman centurion sees how Jesus dies and says, “Surely, this was the Son of God!”

Jesus comes into the synagogue on the Sabbath and He teaches. But He doesn’t teach like the scribes who think He has an unclean spirit. He teaches with authority. Jesus doesn’t need to consult any commentaries. He doesn’t need to ask the experts. He doesn’t ever say, “Well, this scholar says this and that scholar says that.” Jesus speaks in the first person: “I say to you.” Because He is the Son of God. And while He is preaching, the demons start coming out of the woodwork. Who knows where this demon-possessed guy came from, but wherever it was, it came because it heard the voice of Jesus. The demons all know who Jesus is. “The Holy One of God.” What do you have to do with us, Jesus? Why are you here now? In chapter 5, the demon says, “Have you come to destroy us?” The demons know who Jesus is and they know what He’s come to do. They know what their end is. They know that God will cast them, along with their lord, into the lake of fire for eternity. What they can’t figure out is why Jesus is there teaching in the synagogue. Why has He come on the earth like that? The last day hasn’t come yet, Jesus. Why are you here? And Jesus says, “Yes, the Day of the Lord has come.” The end of time has come within time. The Reign of God has begun on the earth, wherever Jesus is with the Holy Spirit. And that means the end of the reign of the devil and his unclean spirits. Jesus has come with authority. Authority to speak the Word of God. Authority to cast out unclean spirits. “Be silent and come out of him!” And the devil must. He has no choice. This is not an equal fight.

Jesus is Lord, the Son of God, and He has come to take back the creation that was made through Him. He has authority to heal the sick, authority to revive the dead, authority to calm the wind and the waves. He has authority over everything that afflicts people in their flesh, because He Himself wears flesh. He has authority over life and death, because He dies, but then He rises from the dead, never to die again. That’s the Jesus Mark preaches, which is why he is in such a hurry to get us to the last week of Jesus’ life. Read the Gospel of Mark, and see how many times Mark uses the word “immediately.” Immediately, Jesus comes to the synagogue; immediately, the man with the unclean spirit comes. Immediately, immediately, immediately. Quickly, quickly, because the point of this story, and the full authority of this Man is seen at the cross, where the Roman soldier says, “Surely, this was the Son of God!”

Jesus is the Son of God in flesh, crucified and resurrected. And He has authority over this whole creation. And if He has authority over this whole creation, then He has authority over you, because you’re part of this creation. He is your Lord whether you recognize it or not; just as He is the Son of God whether you recognize it or not. You don’t have to make Jesus Lord of your life; He already is, by virtue of His death and resurrection in the flesh; by virtue of the price He paid to buy you back from your former lord, the devil. And you confess it. You confess it every time you say, “I believe in one Lord, Jesus Christ.” What does that mean? It means that I believe that this Jesus, true God, begotten of the Father from eternity, and true man, born of the Virgin Mary, is my Lord. He says, I have redeemed you, a lost and condemned creature; purchased and won you from sin, death, and the devil, not with gold or silver but with My holy, precious blood, and with My innocent suffering and death. You belong to Him forever. And He has come to do battle against the same forces, the same powers, that have afflicted people in bodies, minds, and souls, since the Garden. He has that authority, and He has come to deliver you by His death and resurrection, which He gives freely to you.

Everything that is truly part of the Christian life; everything that Jesus has given to His Church, is spiritual warfare. We think spiritual warfare is some particular prayers that we pray against the devil, that it’s only part of the Christian life. But everything that a Christian does, as a Christian, is warfare against the prince of this world. From your baptism on. Baptism is the first and eternal blow that Jesus strikes against the devil’s kingdom, tearing you from his jaws. The battle does not begin in earnest until then. Luther wrote that baptism hangs a life-long enemy around the neck of the one baptized. (Sorry, Michael, too late to take it back now!) And then, daily, the warfare continues against your own sinful flesh, especially every time you hear the absolution: “I forgive you all your sins in the Name of the Father and of the Son and of the Holy Spirit.” When the devil and your flesh try to drag you back into sin and show you what your heart looks like, the absolution is the certain promise of Jesus that He will not let you go. You are forgiven. Jesus has already dealt with the devil and your flesh. And every time you pray, especially when you pray the words that Jesus has given us to pray, you are doing battle against the devil and the world and your flesh. Don’t take this prayer lightly! Hallowed be Thy Name. That means that His Word goes out, and we pray that among us His truth and faith would be. That is a prayer against the devil and his lies. Thy Kingdom Come. When the Kingdom of God comes, that means an end to the kingdom of the devil, which the demons whom Jesus encounters know full well. Thy will be done means that God will thwart the wills of the devil and your own flesh and bring them to nothing. Give us this day our daily bread is a prayer against the devil who is trying to tear that daily bread from our mouths and cause us to believe that God will not keep His promises. Forgive us our trespasses as we forgive those who trespass against us is a prayer that sin and the devil will not have the last word, not for us, and not for those around us. Forgiveness, instead of being torn apart. Lead us not into temptation, but deliver us from the Evil One. Deliver us, finally, O Lord, from the evil one and all evil, including eternal death. Don’t lead me into temptation, and He says, “I will not, because I have already gone into the wilderness to be tempted by the devil, and I have come out victorious. I have heard your prayer and done battle on your behalf. Amen! It is so! This is the Jesus who fights for you, who claims you, you feeds you His own life-giving Body and Blood. This is the Jesus who has come for you against the devil’s works and the devil’s ways. Yes, I renounce them! And soon, soon, the God of peace will crush Satan underneath your feet.

One thought on “Authority”