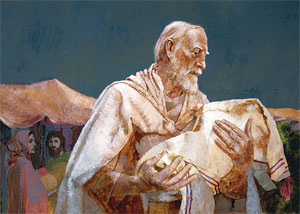 Most of us associate having children with being young. You’ve probably said, or heard someone say: it’s a good thing we have children when we’re young, otherwise we couldn’t keep up. We have a tendency to put some things into the category of being “young,” and some things into the category of being “old.” And having children definitely belongs in the category “young.” But we have other categories, some for God. The things we think God does and should do; the things we think God doesn’t and shouldn’t do. And all of it is based on what we can see. We see bad things and think thoughts against God; we see good things and think thoughts in favor of God. But who, in the history of this world, has ever had a life planned out and nothing ever deviated from that plan or destroyed it? You don’t know and cannot say what will happen. Neither could Abraham.

Go back to Genesis 12, to the city of Haran, where Abram and his wife have settled with Abram’s father. Things are going smoothly, Abram is settling down with his family, and that is precisely when God says to him, “Go from your country and your kindred and your father’s house to the land that I will show you” (12:1). Then Yahweh gives him the promise that was to define his life: “I will make of you a great nation, and I will bless you and make your name great, so that you will be a blessing. I will bless those who bless you, and him who dishonors you I will curse, and in you all the families of the earth shall be blessed.” So at 75, Abram leaves with his wife and his nephew for a yet unknown land. Of course, his 75 wasn’t quite our 75. Abram’s own father was 70 when Abram was born. But years later, we find Abram, still childless, still waiting, and Yahweh reaffirms the promise: your reward shall be very great. Look toward heaven and number the stars, if you are able to number them…so shall your offspring be (15:1, 5). More promises, more waiting; Abram and Sarai try to make the promise happen using Sarai’s servant Hagar, but the only thing that comes with the birth of that son is jealousy and bitterness. No, Sarah will have a son herself. A promise that contradicts everything Abraham can see. A promise that contradicts nature itself. A promise that contradicts 25 years of waiting and hoping and trusting. A promise that is, nonetheless, the only certain thing in Abraham’s life, because Yahweh, who will be God to Abraham and his descendents, has spoken it. What do seeing and feeling have to do with believing? They may coincide, or they may not. For Abraham, youth and the birth of a child have nothing to do with each other. But he believes God’s promise. Even if his body is as good as dead, and his wife’s womb never had life in it—if God speaks, it will be true, against all the world, the devil, death, and hell itself. “Even though Abraham did not see those promises during his lifetime, he nevertheless believed God. Therefore he had eternal life and could not die but still lives. For he believed God when He promised kings, peoples, and a son as the heir of the blessing. Therefore he closed his eyes and withdrew into the darkness of faith. There he found eternal light” (Luther, LW 3:149).

But Abraham does not withdraw into himself; that is not where faith looks. He withdraws into the darkness of faith against the light that his eyes cast on the world. In the world, there is nothing to see. But faith sees the promise, and the promise is Christ. In Christ, though everything else is darkness, there is eternal light, and all is made new. “The very names of the parents are changed. All things proclaim newness… (St. Augustine, City of God, 16.26). Abraham and Sarah, a hundred years old, giggling like children at the birth of the child of promise. Death and life shift into reverse, and all things proclaim newness. So it is with a child born not to a barren woman, but to a Virgin: the Child who is the Promise. So it is with a dead Man who does not stay dead, because He is life itself. So it is with this old creation, and all of us, grown old far too soon; grown far too old for our own good. We know too much, have seen too much, have done and had things done to us that should never have been heard or seen. But what do our old, tired eyes and ears and hearts and minds have to do with the promise? “O God, You see that of ourselves we have no strength” (Collect for Lent II), but with God all things are possible. He is the one who gives life to the dead and calls into existence the things that do not exist (Romans 4:17). He says to a barren earth, be fruitful and multiply, and He says to a barren wife: you will be fruitful, and I will multiply you greatly, and from you will come the Child of All Promises, the King of all the earth. Abraham believed that God would do what He said, and that “is why his faith was counted to him as righteousness. But the words ‘it was counted to him’ were not written for his sake alone, but for ours also. It will be counted to us who believe in him who raised from the dead Jesus our Lord, who was delivered up for our trespasses and raised for our justification” (Romans 4:21-25). And so it is that death is reversed and made the womb of life; and creation begins again: the tree of the cross bearing its saving fruit, and the nations of the Lord multiply into eternity. Forever young, the children of Christ’s unbreakable promise.