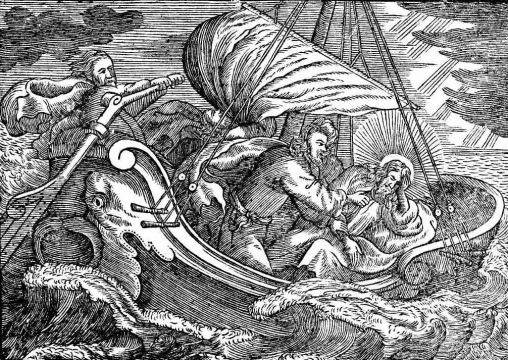 The disciples are in a boat in a storm. The waves carry them up and down, and the boat’s starting to fill up, and they’re afraid. They’ve seen the things God can do, but their courage has melted away. They are at their wits’ end, and all their wisdom has been swallowed by the waves. Finally, they cry out to Jesus, who has been sleeping in the back of the boat the whole time. You care, don’t You Jesus, about what’s happening to us? Don’t you care that the boat’s going down, and we’re all going to drown? Jesus gets up, and without a word to the disciples, rebukes the wind and the sea. He rebukes them like He rebuked the demons earlier. He rebukes them like they’re living things. He says only two words—at least, it’s only two words in Greek: Be silent! Be muzzled! Shut up and stay that way! And the wind and the waves cease. There is a great calm, Mark says. And then Jesus turns to His disciples and says, Why are you so cowardly? Do you not yet believe, you who have seen the things I do? I have power over unclean spirits, to cast them out. I have power over sickness and disease, to heal it. I have authority over the hearing of ears, and the seeing of eyes, and the movement of limbs. Do you still not yet believe? But they are afraid, and they say, Who is this, that even the wind and the sea listen to Him and obey Him? I’m not sure what they expected Jesus to do when they wake Him up. Help bail water? Give them advice for how to get to the other side of the lake? Just be with them in their experience? But when He actually does something, they’re afraid. Who is this?

For 38 chapters, Job has questioned and wondered and doubted; for 38 chapters, Job’s friends have accused him of having some sin, something that’s caused God to punish him in this way; and for 38 chapters, God has been silent and distant. But in chapter 39, God finally answers. Actually, He doesn’t answer; He asks. We’re inclined to put God at the defense table and in the witness box. But God puts Job there. He answers Job out of the whirlwind, which is the same word for the storm that surrounds the disciples’ boat. And the vast majority of times that this word appears in the Old Testament, it is a revelation of God, with the implication of judgment and even wrath. God answers Job out of this whirlwind and He says, Who are you, Job? Did you create everything that exists? Did you set the boundaries of the oceans? Did you create all the animals and do you control them? Are you in control of the rain and snow, when they fall and when they don’t? Who are you? Answer Me. And all Job can do is repent in dust and ashes. He says, I spoke of things too wonderful for me. Things too far beyond me. Things I did not understand. And when Job comes to that point, when he is on his knees in repentance, that’s not the end of the story. And when the disciples are crying out to Jesus in the storm, that’s not the end of the story. The word that comes from the whirlwind is not the final word. That’s the God who is in control of all things. Sometimes we think that a God who is in control is a good thing. We say things like, God is in control; don’t worry. But if that’s the end of the story, honestly, that’s exactly what does worry me. The God who is in control of the storm, the sea, and the wind. The God who is in control of the tornado. The God who is in control of the wildfire. The God who is in control of everything. Where will you turn? Who will save you from the burdens of your life? Who will rescue you from the guilt of your failures, as a father, as a mother, as a pastor, as a friend? Who will save you from the sins you don’t really want to confess, from the shame and embarrassment? It is the God of the whirlwind who accuses you of precisely those things. Who do you think you are? Will you rationalize, excuse, or justify yourself? No. Kiss the Son, lest He be angry, and you perish in the way, for His wrath is quickly kindled. Who will deliver you from the God who speaks from the whirlwind?

Well, in spite of their fear and even in spite of their unbelief, the disciples cry out to the right Person. Now at this point, it might seem a little like we have a schizophrenic God. I’m not surprised that those who don’t believe Jesus is God in the flesh, who don’t believe that His blood and death and resurrection are the redemption of the world—I’m not surprised that they sometimes think there are two Gods in the Bible. They’re wrong—there’s only one God—but I’m not surprised that they think there are two Gods: a mean, capricious one in the Old Testament and a meek, gentle, nice God in the New Testament. But they are not two Gods; they are two experiences of God, or two encounters with God. One encounter is in unbelief, and the other is in faith. But those encounters seem so far apart from each other that we might be tempted to believe they are two different Gods altogether. One is with the God that we naturally seek after: a God who punishes the wicked and rewards the good. A God who is wrathful against the people we identify as sinners and smiles on nice people such as us. The God we think we recognize in the good things of life, but not in the evil. The God we feel the need to defend and excuse when things don’t go the way we think He wants them to go. The other is of a God who is where we do not expect Him to be: being born, sleeping in a boat in a storm, dying on a cross. The God who takes flesh and lets Himself be overwhelmed by the whirlwind. One is the God we think we know and understand naturally, without faith, without revelation. The other is the God who reveals Himself where He hides: in flesh and bread and wine and water. The God who reveals Himself only to the faith He Himself grants. To take refuge in the God whom the Law says must be kissed in submission, lest His wrath consume us, can only be done by faith. To cry out to the God who raises up the wind and the waves and brings us to our wits’ end can only be done by faith. It never happens naturally, in unbelief, by human courage and reason. The refuge in the storm over which God is in control is only found in the God who sleeps in the back of the boat. Flee to that God, seemingly helpless in the storm. Flee to that God, seemingly helpless on the cross. Flee to that God, because His steadfast love never fails; thank Him for His neverending mercy, for His wondrous works to such cowards and unbelievers as we are. He alone delivers and brings us to the haven which faith seeks. Confess His mercy, heard, and eaten and drunk. Let us give thanks to Yahweh for His steadfast love, for His wondrous works, even now, in this, the day of salvation.