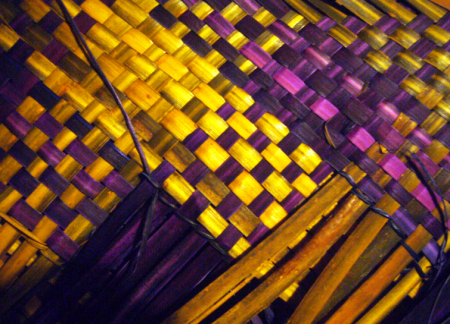 I always get a little nervous when I see a loose thread on a sweater or sock. I’m afraid I’ll catch it on something sharp and the whole thing will come undone, unraveled, and I’ll end up with nothing but a mess of thread at my feet. That seems like a pretty good metaphor for what can sometimes happen in our lives or in the world. We catch something on a sharp edge, and the further forward we move, the more it comes undone, and the less we seem to be able to control it. Whole wars have been waged, traced back to a single violent act or word. And then the mystery is, how do we put all this back together again? The mystery is, at least to me, how was it all held together in the first place? But, really, it’s not that surprising that things tend to come unraveled. Follow that thread back to the Garden, to the fruit of the Tree of the Knowledge of Good and Evil, and you see that it’s been coming undone for a long time. David says that he and, by implication, us, were conceived in sin; that no one is righteous. So the mystery is not really why things seem to come undone so quickly and easily, but why they don’t come completely unraveled. The only reason everything doesn’t simply fall apart is that God in His providence prevents it.

But in Ephesians 1, Paul lays out for us the mystery of how God is putting everything right again. This is not a mystery that we can solve, or that is shown to us in nature or in ourselves. It’s not a mystery that is revealed to us as we figure out how to put things right again for ourselves; as if we could make it right by doing the right things, resolving the right things, doing things differently this year. It is a mystery that has to be revealed supernaturally, by God to us. Revelation is simply a light shining so that we can see; and when Christ the Light of the world is born, we begin to see. Christmas is the revelation of the mystery: this is how God is going to put things right again!

Paul lays out this mystery in a densely woven piece of whole cloth in Ephesians 1. In fact, the language itself is put together so that it is really only one sentence from verse 3 to verse 14. We have to break it up in English, and even in the printed Greek, but grammatically, it’s only one sentence. It’s so tightly woven that you can pull on any of the threads, and promise after promise after promise of God in Christ comes out. The thread I’d like to pull on this morning is a word that’s translated “unite” in v. 10 of our Epistle reading, but the word itself seems more colorful to me. It means something like “up to the head,” and it was used in different ways in Greek. It was used for coming to a sum mathematically: so 1 + 1 is summed up as 2. It’s also used by professional speakers, orators, to sum up everything they’ve said. Paul uses it this way in Romans 13 when he says that the commandments are summed up by “Love your neighbor as yourself” (13:9).

In Ephesians 1, Paul says that everything is summed up, everything comes to its head, in Christ. God is bringing everything in heaven and earth together in Jesus. God’s entire plan of salvation comes to its summary in the baby born of Mary. That same Jesus is the firstborn of all creation, because He is the Son in whom all things in heaven and on earth were created (Colossians 1:16). The one through whom all things were made is the same one whom God, in the fullness of time, sent forth to be born of a woman, born under the Law, to buy back all those who were slaves to sin under the Law, so that we might all receive sonship—adoption as sons. And for that adoption, God chose you in Christ before the foundation of the world, that you might be holy and blameless before Him. And if you are sons of God, then you have the inheritance intended for the sons of God. The guarantee of that inheritance, the down-payment of its surety, is the Holy Spirit who has been given to you. And you know that you have the Holy Spirit if you believe the words of Jesus. If you have the Holy Spirit, then you have Jesus, and if you have Jesus, then you have everything.

Jesus is how God is setting everything right again. In Him, the mystery is revealed—though it doesn’t become any more comprehensible how everything in the whole creation could be put right through one man born a long time ago. Yet, that is the promise: that in the one man, Jesus, in His death and resurrection, there is the end of the old creation and the beginning of the new. In His death, He bears the whole sordid mess of human sin and death, binds it all up in His flesh, and dies because of it. But in His resurrection, He begins a new creation in a life that cannot be ended ever again. Everything holds together in Christ; and this is how, Paul says in Romans 8, God is working all things together for good for those who love God and are called according to His purpose; foreknown, predestined, called, justified, and glorified in Christ. God is weaving together, out of all the dirty and messed up threads, a new and glorious garment of salvation. He is taking the small and the large messes, the whole ugly and unraveled history of human failure and sin, and He is making something new in the flesh of Jesus.

And into that new creation He has woven you, joining you to His Son in Baptism. It is not a joke; it is not just a nice picture. You have been joined to Christ, and you have been wrapped up in this new garment of salvation, prepared for you from the beginning of heaven and earth. This is a garment that can never come undone, it can never be unraveled, because it is summed up in Jesus Himself, who is alive forever. He is the head from whom the whole body gets its life; He is the head in which the whole body is summed up, and to which the whole body, speaking the truth in love, is being built up in love. To that end, to that summation of the entire plan of salvation, Jesus feeds you with His own body and blood, wraps you tighter and tighter in His glorious and gracious garments of salvation. So no matter what happens in 2016, watch as the Lord weaves the threads of salvation tighter and tighter. Every word that He speaks from birth to death, from resurrection to ascension to His return, goes into this garment given freely to you. And just as God kept His promise, in the fullness of His own time, to send His Son in the flesh, so you can be sure that in the fullness of all time, He will just as surely keep His promise to bring it all to its conclusion in Jesus, all things in heaven and on earth. He has made His promise in Christ, and until we acquire possession of it, He has sealed us with the Holy Spirit, guaranteeing our eternal inheritance.

2 thoughts on “Summed Up”