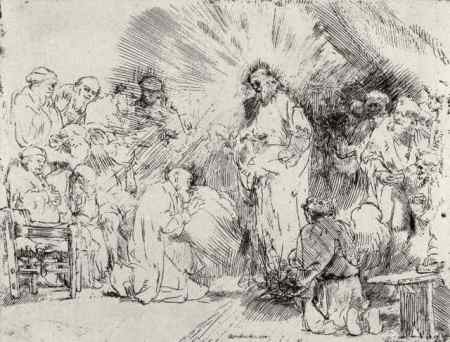 Who sent you? That question is in the air wherever Jesus goes, particularly in the Gospel of John. Who sent you? Everything depends on the answer to that question. Everything depends on who sent Jesus, where He has come from, from whom He has come. It’s so significant that Jesus Himself uses the two words for “send” 42 times in the Gospel of John alone. 42 times Jesus speaks of being sent. And whether people believe Him or accept Him, He is clear about who sent Him and why He was sent. Already back in chapter 3, Jesus says that He was sent into the world not to condemn the world—the world is already condemned; already under the judgment of sin and death—He didn’t come to pile up condemnation, but that the world might be saved through Him. And when people ask Him, What must we do to be doing the works of God? Jesus answers, This is the work of God: to believe in the one whom He has sent. And here in chapter 17, right at the beginning, when Jesus begins to pray and His apostles are there overhearing His prayer: Jesus prays, This is eternal life: to know You, the only true God, and Jesus Christ, whom You have sent. Jesus was sent into the world to bring salvation and life to the world, and those who believe Him have exactly that.

If Jesus was sent by the Father, then He has authority. He has authority to speak the Word of God, to speak the truth about God. But John makes it clear that it’s more than that. Jesus doesn’t just speak the word of God; He doesn’t just say true things about God—He is the Word of God. Jesus is the Word that God has spoken into the world in flesh. So if you want to hear God speak, if you want to know what God has to say, you listen to Jesus. Jesus is the only Word of God there is, and the Scriptures testify to Him in every place. If the Father has sent Jesus, then He has authority to lay down His life for the sheep, and He has authority to take it up again. The Father and the Son do the same work and have the same will; the Father is in the Son and the Son in the Father because they have a single divine nature. Their will and their work is that Jesus lay down His life for the world, and take it up again in resurrection. If the Father has sent Jesus into the world, then Jesus has the authority to forgive sins, and He has the authority to send the Apostles out into the world to do exactly that: As the Father has sent Me, so I am sending you. He breathed on them, and said, Receive the Holy Spirit: whatever sins you forgive, they are forgiven; and whatever sins you bind to a person, they are bound to that person. Jesus has the authority of the Father, and because He is the faithful, beloved Son, made perfect in the flesh through suffering, when He prays, He is always heard. And He is heard for you. He prays for you here in John 17. Did you hear Him? He prays not only for those who are there with Him in that upper room, the Apostles who are there; He prays also for those who would believe in Him through their word. And since you have believed in Him through that apostolic Word, therefore Jesus prays for you.

See how much depends on who sent Jesus, and who sent the Apostles! If the Father did not send Jesus, and if Jesus did not send the Apostles, then everything is uncertain. If they were not sent, then when Paul says that we are part of the household of God, being built upon the foundation of the Apostles and Prophets, Christ Jesus Himself the chief cornerstone, then we had better get out of that house, because it’s going to fall down. Who knows, then, if Jesus speaks the same word as the Father, and if the Apostles speak the same word as Jesus? And if not, then your faith is in doubt, and there is no assurance and no certainty. Everything depends on the answer to the question, Who sent you? Everything depends on having a certain word from God Himself, which He has spoken in Jesus, and to which the Apostles bear witness beginning in Jerusalem, to Judea, Samaria, and the ends of the earth. Everything depends on having a preacher and a witness to that Word, and no other. Otherwise, as Paul says, who can call on the Name of the Lord and be saved, if no one has heard? And who can hear, if no one has preached? And who can preach if no one is sent? But we follow the apostolic pattern, the pattern of sending: the Father sends the Son and the Son hears and speaks nothing but what the Father says. The Son sends the Apostles, and they hear and speak nothing but the Word made flesh, crucified, resurrected, ascended, and coming again. The Apostles entrust that Word to preachers who will repeat nothing more and less than what the Apostles saw and heard. That’s why Luke makes a point of saying that the Church in the book of Acts devoted themselves to and gathered around the doctrine of the Apostles, because that is the word that created the communion they had with the Apostles and with each other. In that communion, they broke the bread which is His Body, and they prayed as one, and they served their neighbors in love. That’s why John himself says that it is what they saw and heard and touched, the Word of Life who is Jesus—He is the one they proclaimed so that all who heard would have communion with the Apostles, which was communion with the Son and the Father.

Their communion, and ours, can only come from the Word made flesh preached and given to the world for salvation and eternal life. Neither Apostles nor any other preacher has authority to speak any other word than the One who sent them out. It is that Word alone that saves and gives life and creates a communion beyond anything that humans can make. Woe to the church that tries to attract the world’s attention with anything other than the confession of Christ, the Word made flesh (Sasse). So Apostles and preachers have a command not to depart from that Word, so that Jesus is given to sinners who need Him. But they also have a promise, that Jesus will continue to do exactly what He was sent to do: save and give life to those who hear and believe. That is a promise for you who hear, as much as for the preacher: you have heard this apostolic word and believed it. That means that Jesus prays for you. He prayed for the Apostles’ word to go out, and He prayed for those who would believe in Him through their word. There is nothing more certain and more assured than that Jesus, who was sent from the Father, will save by that Word; and He continues to pray for those who hear that Word. May the Father, who sent Jesus into the world, continue to answer that prayer, for you, for the whole Church, and for the world.