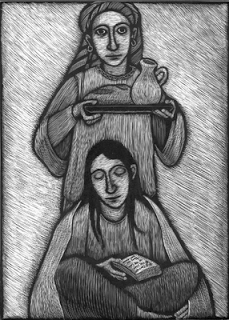 Video of the Divine Service is here, here, and here.

We should probably start with the things that Jesus doesn’t say to Martha. Because I have a tendency—and I suspect you do as well—to make Mary and Martha into two different examples. Mary is a good example, of what we should do and how we should be; Martha is a bad or negative example of what we should not do and how we should not be. And there may be some of that, but first we should notice what Jesus doesn’t say to Martha. He doesn’t come into her house and tell her to stop doing what she’s doing and sit at His feet and listen to Him. He doesn’t compare her to Mary and say that she’s doing bad or wrong things, while Mary is doing good and right things. He doesn’t tell her that what she’s doing is unimportant or not worthwhile. The only point of conflict in this entire account is when she comes to Jesus to complain about her sister not helping her. When Martha tries to get Jesus to tell Mary to help her. That’s the only point of conflict.

And Jesus says something that could probably be spoken to each one of us: “Martha, Martha, you are anxious and troubled about many things.” You are anxious and troubled about many things. Couldn’t Jesus just as easily say that to me or to you? And the “many things” about which Martha is troubled and anxious are all within the little sphere of her own home. She’s concerned about serving Jesus, and probably His disciples, and whomever else happens to be there. But compare that to how much we’re concerned about today. We have so much information, so many ways to communicate, that news and information come to us almost instantaneously to when something happens. We have more information than anyone else has ever had in the history of the world, and we don’t know what to do with it. So we become anxious and troubled about it: not only about the things in our own lives, our own families, our own congregations, our own country, but about things around the world.

You are anxious and troubled about many things. But there is one thing needful. Martha’s issue is not that she is doing bad things and Mary’s doing a good thing. It’s not that she’s doing unimportant things, while Mary is doing an important thing. The problem only comes when the many come into conflict with the one. Because what is Martha really saying by her complaint to Jesus? She is saying that what she is doing is more important than what Mary is doing. Why else would she want Mary to stop doing what she is doing and help her? Because her serving, doing, working is more important that Mary’s sitting, listening, receiving. Isn’t that the way it is in the world? Everyone knows that doing and working is better than not doing and not working.

And the churches sometimes pick it up as well. There are churches that essentially cancel their services so that they can go out and serve, work, do, for the sake of other people. They say things like, let’s not go to church, let’s be the church. How? By working, doing, serving. And Jesus certainly doesn’t say that those things are unimportant or not worthwhile. He doesn’t say they’re bad or wrong. But one thing He is very clear about: if you think that serving, working, doing—even for Him—is more important than sitting, hearing, receiving from Him, you’ve missed the point. There is one thing needful, and it is the opposite of everything ambitious sinners think is important. In the hurricane of distraction, anxiety, and trouble, adding more working, serving, doing will never anchor you in life. You need something to ground you in Christ, and it is exactly what Mary is doing; which is to say, nothing. Jesus is doing everything, and He is, as always, the center of this account. He is the anchor in the midst of Martha’s hurricane. She just doesn’t know it yet. We tend to think that the Christian life is primarily about our action, once we’ve been saved—past tense. But the fact is that most of the Christian life—the life of Christ, really—is passive: being baptized, being forgiven, being made holy, being raised from the dead. All that is God’s work in Jesus Christ. And only God’s Word, spoken into flesh in Mary’s womb, crucified and resurrected for you, can be the anchor in the midst of your hurricane.

That’s what the Sabbath is all about. When Jesus fulfills the Sabbath command on the Saturday following His death, He rested from all the work that He had done. He finished it. Whereas our work is never done in this creation, His was finished with death and resurrection. And now He delivers that very death and resurrection, that very Sabbath rest to you and me in the midst of our never-ending work, our never-ending service, our never-ending distraction, anxiety, and trouble. That’s His work for you, which He gives an you receive. And He refuses to take His work away from people, in spite of the fact that other people think their work is more important. His work is the one thing needful, and that’s why we’re here. So we can sit, hear, receive what God speaks to us in Christ, receive His gifts. He gives us rest, anchors us in Himself, revives us with His own life, and grounds us so that we know, in the midst of all our furious activity, what is the one thing necessary. When we are busy with the important and worthwhile work for the sake of our neighbor, He is the one thing needful. And when we can no longer work, when our bodies or our minds prevent us from being what the world calls “productive members of society,” then, too, He is the one thing needful, doing His work, giving His life to us, now and forever.