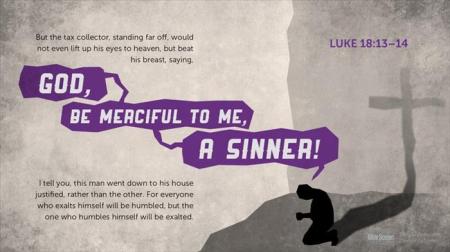 We’ve been well-trained. We’ve been so well-trained that when we hear this parable, we know—automatically—that we do not want to associate ourselves with the Pharisee. Pharisee is a four-letter word. Pharisee is shorthand for someone who focuses on the minutiae of rules and regulations, rather than the substance of the Law of God. Pharisee is shorthand for someone who wants to put all the emphasis on human opinions, rather than on the Word of God itself. It’s shorthand for hypocrite, for someone who wants other people to do things that he himself is not willing to do. It’s shorthand for a certain kind of religious pride. But the fact is, at Jesus’ time, the people who saw Pharisees would have looked up to them. They would have wanted to emulate them. Pharisees were the ones who knew the Word of God well. They tried really hard to keep the Law; so hard, in fact, that they made other laws to keep so that they wouldn’t even come close to breaking God’s Law. No one would have thought they were bad people or hypocrites. They were the best of the best. They were the sort of people you wanted in your congregation. They were the strong givers and the ones who volunteered for everything. Even now, some of you are cringing. Because some of you are strong givers and some of you volunteer for everything, and you know you don’t want to be associated with the Pharisees. But I’m serious. People would have said, mamas, please let your children grow up to be Pharisees.

On the other hand, we know from the parable that we should associate ourselves with the tax collector. Jesus says that it was the tax collector who went down to his house justified, who went down to his house righteous, that day. So we know we should be like the tax collector, standing with our heads down and beating our breasts, and saying, “God, have mercy on me, a poor, miserable sinner.” But the people at Jesus’ time, without a doubt, would have sung, mamas, don’t let your babies grow up to be tax collectors. The sort of adjectives and descriptors associated with tax collectors were words like “greedy,” “selfish,” and “rich.” They were the 1% we all love to hate. There’s a reason he’s over there in the corner weeping and asking for mercy. Because he needs it! If anyone should be over there beating his breast, it’s that guy. At that time, the way that tax collectors made their money was by how much they collected over and above what Rome demanded. So Rome told them to collect a particular amount, and anything over that amount, they could keep. The more they collected, the more they made. The richest tax collectors were those who took the most from people. No one’s looking up to tax collectors.

I think we have a hint in the verses that come right after this parable, where people are bringing infants to Jesus so that He will touch and bless them. Why does Luke put these two accounts next to each other? Because they point to the same thing. The disciples rebuke those bringing the children. Why? We’re not told. Maybe they’re trying to protect Jesus from being distracted. Or maybe they’re acting like the Pharisee, trusting that they are righteous, while looking with contempt on children. Either way, Jesus says, Let the children come to Me, and do not hinder them. Do not prevent them. Because of such as them is the Kingdom of God. And anyone who doesn’t receive the Kingdom of God in the same way that children receive it will never enter into it.

How does a child receive the Kingdom of God? What makes children a good example for Jesus to use of His ideal disciple? Is it because they’re cuter than adults? Is it because they’re more innocent? Is it because kids say the darnedest things? No. It’s because they bring nothing to Jesus. Their hands are empty. Have you ever helped a child pick out a present for her parent? Where do children get the money to buy things for their parents? Probably from their parents—maybe even from the parent for whom the child is buying the gift! Even what they give isn’t really theirs. And not only do they not bring anything to Jesus, but they have to be brought. And Jesus blesses them and gives them the joy of His own life. Just like a tax collector who’s got nothing in his hands but his own sin. The Pharisee has all sorts of things in his hands. He stands before God and his hands are full of his own righteousness. Full of his own tithes, and his own time, and his own goodness, and his own righteousness. But children and tax collectors and sinners have nothing in their hands.

The Pharisee asks God to look at what he has; the tax collector asks God to give him something. He asks God to give a propitiation, an atoning sacrifice, someone or something to cover his sin, so that God might be merciful to him. And then Luke gives him exactly that. And Luke gives it to us. In chapter 23, Luke shows us Jesus hanging dead on the cross. And then he shows us the centurion standing there and saying, “This was a righteous man!” And then, for only the second time in the Gospel, people beat their breasts. The crowds, having seen everything that happened with Jesus’ death, returned home, beating their breasts. Here, Luke says. Here is the atoning sacrifice by which God is merciful. The same Jesus who welcomes children; the same Jesus who tells a parable about an unrighteous righteous man, and a righteous unrighteous man—this is the Jesus who is the sacrifice by which God is merciful to poor, miserable sinners. He is the righteous man by whom all others might return to their homes righteous. He is the Jesus who comes to seek and save lost tax collectors and lost children, and salvation comes to them, and then they go home justified.

Nothing in my hand I bring. Nothing in my hand I bring, to His cross alone I cling. Naked, come to Him for dress. Helpless, come to Him for grace. Foul, I to the fountain fly; wash me, Savior, or I die. And He does wash you. He does lift you up, exalting you to His cross, so that you may have His life. He dresses you in His righteousness, graces you with His blessing. For children, for tax collectors, for sinners—and, yes, even for Pharisees and hypocrites. For you. He is the righteous man, and He is the sacrifice by which God is merciful to you. Today, you will leave this house and go to your house righteous and just.