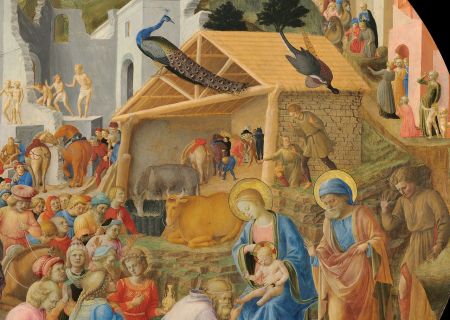 Video of the service here.

Last Sunday, I was watching the children’s Christmas service. Toward the end, I was watching as all the children gathered in the stable, around the manger. There were Mary and Joseph and the Baby; there were shepherds with their unruly sheep; there were angels; there were magi, or wise men. And it was beginning to get a little crowded in there. And, for just a moment, it was touch and go as to whether or not the whole stable might not come down around them.

Maybe that’s not such a bad metaphor for what sometimes happens around this time of year. We are gathered here around the manger, to celebrate the birth of this Baby, the Son of God in flesh. And it can get a little crowded. Besides all the buying, baking, preparing, planning, and wrapping, there’s also family. Family is often good. But families don’t always look the way they do in the commercials. Sometimes families are divided from each other: divided by distance, divided by disagreement, divided by death. And we bring all that with us to the manger. We bring all our griefs and sorrows, all our joys and happiness. We bring all our longings and all our regrets. We bring everything that’s happening in the world, in our country, in our lives, and in our families, and it starts to get a little crowded around the manger. How can this Baby bear all of this? How can this stable contain all of this? And sometimes it’s a little touch and go whether or not the whole thing might come tumbling down around us.

C.S. Lewis wrote a series of books called The Chronicles of Narnia. You may be familiar with them, or at least with the first book, called The Lion, The Witch, and The Wardrobe, in which it is always winter and never Christmas. But the last book in the series is called, fittingly, The Last Battle. And in this book, many of the characters from earlier in the series appear in Narnia one last time. And they get caught up in a battle between the friends of Aslan and their enemies, the friends of the false god Tash. One by one, they are killed; and those who are not killed are forced into a barn, where everyone believes that the god Tash is going to kill them.

They have come home, in fact. What they see is Narnia, but a Narnia that is so much bigger, so much more beautiful, so much more real than anything they had seen before. But they cannot stay there, in the shadow of the stable door. Unlike the dwarves who are huddled in a little group by themselves. No matter what anyone says to them, they still think they are in the stable. They think they are in the darkness, and they refuse to believe they are in the sunshine and day of that new world. The best food and the best drink, they think it is leftover scraps from the animals, and dirty water from the animals’ trough. They say, the dwarves are for the dwarves. We refuse to be taken in! So they stay there in what the imagine to be a very crowded stable, dark and horrible.

But the others cannot stay in the shadow of the stable. “Further up and further in” becomes their refrain. As Mr. Tumnus, the Faun, says, “The further up and the further in you go, the bigger everything gets. The inside is bigger than the outside.” Further up and further in they go. Further up and further in to the land, until they see Aslan, the Lion, who, in these books, is a picture of Jesus. They are afraid he’s going to send them back to their own world, and that they will never see Narnia again. But Aslan says, Children, haven’t you guessed? There really was a railway accident, and you are what you would have called in that world, dead. But they rejoice, because they have entered a land that contains every good thing that they loved in both their own country and in Narnia.

Further up and further in, to the ascension to the right hand of the Father’s power, from which Jesus reigns, even now. The further up and the further in you go, the bigger everything gets. It is bigger on the inside than on the outside. Go in to the Lord’s House; go in a mile (David Eugene Edwards). The One who is in the womb of Mary, in the manger, on her lap, is bigger than the whole world. He is the infinite God wrapped up in finite flesh and blood. He is the one through whom all things were made, but He must be held up by His mother’s hands. In Him all things hold together; all things are for Him, and through Him, and in Him. This Baby can and does bear the weight of all creation. Further up, and further in, until we see Him face to face. And on the Day that everything in this creation finally does come tumbling down, we will find ourselves in a renewed world, bigger, more beautiful, more real and more true than anything we have ever yet imagined. Further up, and further in.