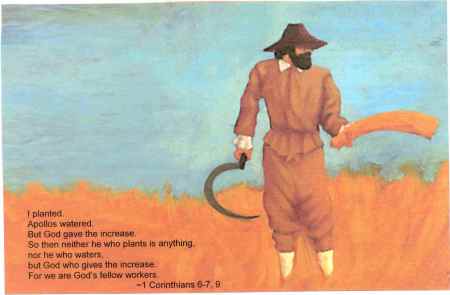 You probably have one of those books—maybe it’s in the basement, or the attic, or in a storage container, or on a bookshelf: a book for one or more of your children with dates in it. The date of birth, the date of baptism; the date of the first time your child ate solid food, or said a word, or took a step, or got a haircut. Maybe the first tooth, or the first lost tooth. The first day of school. And maybe the book doesn’t have it, but you probably mark the milestones of graduating from high school, or graduating from college, or getting married.

And Paul is a little worried. He’s worried about the Christians in Corinth, who are still infants in Christ. That might sound like a nice thing to us, like a cute thing. But for Paul, their spiritual father, it’s worrisome that he fed them with milk before, but they are still not ready for solid food. They were not able to eat solid food, and they are still not able, now. They have remained infants, though they were born years before. It’s not about child-like faith; it’s about hanging on to their old life, which has been put to death. They were born from above by water and the Spirit, clothed with Christ, but they’re trying to hang onto that old, fleshly life. Nothing wrong with being infants in Christ: the problem is that they have remained as infants, as if a person grew up but still wanted to keep drinking milk forever.

And what is the evidence that Paul points to that they are not growing up? That they are cultivating jealousy and envy of each other, instead of rejoicing in the multiplicity of gifts the Spirit gives for the building up of the entire Body of Christ—as if an arm should be jealous of a leg, or an eye of an ear. And there are factions; division, discord, strife; people following Apollos or Paul. Now, I know you have never experienced a congregation where there is strife and discord, but that’s the way it is in Corinth. But what is Paul? What is Apollos? Who is any pastor? Simply workers in the field, workers for the building. Maybe Paul plants, and maybe Apollos waters, but they are one. That is, neither of them should be the focus. God alone gives the growth. Neither the one who plants nor the one who waters makes anything actually grow. The Corinthians are God’s field, God’s building.

I was looking through all the scrap-books out there that Lorena has put together, containing pretty much the entire history of this congregation. It’s amazing. Many of you were here through a lot of that history. If you weren’t, or if you’ve forgotten, go take a look. This physical building, in fact—many of you were instrumental in the building of it. And you are probably—and rightly so—proud of your part in it. I was also looking at the list of pastors who have been here. Regardless of who they were, or how they “succeeded” or “failed,” they were all there as planters or waterers. I didn’t plant, and I’ve barely watered, but I’m here for the same reason: to work in the field, to work in the building. And you are not their field or their building. You are not my field or my building. You are God’s field, God’s building. Who are we? Nothing. God alone grows the field. God alone builds the building, or the laborers build in vain. Each person, each pastor, each member of the congregation has a place, has a realm, has a sphere in which he or she is to work. And it’s good. What place do jealousy, envy, division, strife have in God’s field and God’s building, the Church?

What did those pastors have? What do I have? What do you have, except the things that God has given to grow His field and build His Church? Since He alone gives the growth, only His Word and Gifts will produce fruit. Only Christ, speaking His words to us; only Christ, forgiving our sins; only Christ, giving us His own Body and Blood to eat, will produce the growth. Everything else—no matter how good it appears, no matter how beneficial, no matter how appealing it is to us—everything else is extra to God’s Word and God’s Gifts. By those gracious gifts—and those gracious gifts alone—God both grows His Church numerically and grows up infants to maturity in Christ. The weakness of the flesh that clings to us, the weakness of our flesh that drags us back into our former death, God is putting to death—so that envy, jealousy, and strife will die. Like Paul says, when I was an infant, I talked like an infant, I thought like an infant, I reasoned like an infant; but when I became a man, I abolished the things of the infant. But the weakness of the flesh makes the Law impotent to accomplish that. So Christ entered the weakness and likeness of sinful flesh, so that sin might be put to death in His own flesh. And then He brings the dying into His Life.

Dear God, put to death in us all the envy and jealousy and strife and discord that comes so naturally to our flesh! Dear God, by the Spirit by which You raised Jesus from the dead, make us alive so that we find our life and length of days only in You. We no longer count time by the milestones of the flesh, but by marker of Life itself: resurrection. So week after week, resurrection day after resurrection day, we rejoice in Christ our Life, by His Word and His Body and His Blood. Every Lord’s Day is a little resurrection day, until we ourselves are raised; until the harvest is brought in, and the building is complete.