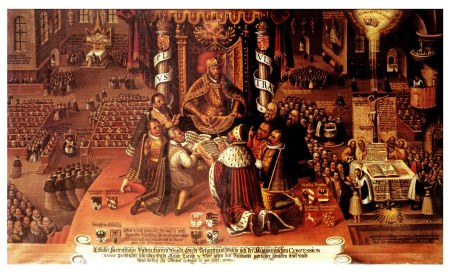 2500 years ago (give or take), Ezra the priest, Nehemiah the governor, and the Levites gathered the people of Israel after they had returned from exile in Babylon. Ezra read to them the instruction of Yahweh, and they heard and understood it. And they wept. Maybe they wept because they realized how far short they had fallen of the commandment of God. Or maybe they wept because they realized that, in spite of their unfaithfulness, God had kept the promise He had given them through Moses. Whatever the reason, Ezra, Nehemiah, and the Levites tell them, don’t weep. This day is holy to Yahweh. Rejoice, eat, drink. And if you have extra and some people have none, share with them, so that everyone can rejoice together at the words of God.

550 years later (give or take), Paul wrote to Timothy, the pastor in Ephesus, and he told him to keep fighting the good fight; take hold of the eternal life that was given to him by the laying on of hands, about which Timothy had made the good confession in the presence of many witnesses. And then Paul points Timothy to Jesus Himself, who made the good confession in front of Pilate. Jesus had said nothing more or less than what the Father had given Him; Timothy said nothing more or less than the word of Jesus, just as Paul had taught him.

And 487 years ago today—it was a Saturday, around 3 o’clock in the afternoon—Dr. Christian Beyer stood before Emperor Charles V and made the good confession. Because it happened in the German city of Augsburg, we call it the Augsburg Confession. For two hours, Beyer made the good confession. And he spoke so clearly, distinctly, and powerfully, that the people who couldn’t fit into the room stood and listened outside the entire time. Even the Emperor, apparently, fell asleep for half an hour. When he was done, Dr. Gregory Brueck said to Charles, “Most gracious Emperor, this is a confession which, with the grace and help of God, will prevail even against the gates of hell.”

All of these people—Ezra, Paul, Timothy, the confessors at Augsburg—they were all holding fast to what Jesus says: Whoever confesses Me before men, I will confess before My Father in heaven. All of them, even Ezra, are simply saying what they had been given, what had been passed down to them, nothing more and nothing less. Ezra only has the promise which is to be fulfilled, but he’s giving the people the Words God had given Moses. This is what it means to make the good confession: to say the words of God about Jesus, without adding anything to them and without taking anything away from them.

This year you are going to hear, if you haven’t already, a lot about how it’s the 500th anniversary of the Reformation, because October 31, 2017 is 500 years since Martin Luther posted his 95 Theses in Wittenberg. There are going to be trips to Germany—should we call them pilgrimages? There are going to be speeches and gatherings and memorabilia sold. A lot of different people with a lot of different agendas are going to try and claim Luther for their causes. But here’s the irony of it: Lutherans are not Lutheran because of Luther! And the fact is that the Augsburg Confession is as much greater than the 95 Theses as the completed, furnished, and lived in house is greater than the first bit of cement laid in the foundation. If you’re going to read one thing this year in honor of the Reformation anniversary, it should be the Augsburg Confession, rather than the 95 Theses. Because in the Augsburg Confession you will hear, in words nearly as simple and clear as the Small Catechism, the story of God’s salvation of sinners from creation, through the incarnation of Jesus, through His delivery of that salvation through His Word and Baptism and Supper, through the coming of Jesus in glory to remake His creation and raise the dead. Though some of it is in academic language of the day, it is most certainly not an academic lecture. It is a clear and pure confession of nothing more and nothing less than the Scriptural proclamation of Jesus Christ for you.

If the Augsburg Confession adds anything to the Scriptures or takes anything away, then the Roman Church was right and the Lutherans were and are heretics who should have no part in the Church of Christ. More than that, we ought to throw it away, take it out of our constitutions, and repudiate the name Lutheran forever. The good confession is not a Lutheran confession; it is a Christian one. But we do have it in all of our constitutions. It is part of my vows that I made when I was ordained and installed as a pastor. And it is that because it is the same confession that Paul, Timothy, and even Jesus made. It is the confession that we make when we say that we will hold fast to it even until death; that we will suffer all, even death, rather than fall away from this confession and Church. When you join a truly Lutheran church—whether you know it or not—you are claiming the Augsburg Confession as your own confession. If it is only a historical document, written a long time ago, it is not really a confession. A confession is ongoing. If it is a Christian one, it means that it is part of the house that is built on the foundation of the Apostles and Prophets, Christ Jesus being the chief cornerstone. And the fact is this: that wherever the Augsburg Confession and the rest of the Book of Concord have been forgotten, neglected, ignored, or rejected, the Scriptures cannot be far behind. The Confessions are not the Scriptures, but they bind us to those Scriptures, as certainly as do the Creeds. When we throw off the bonds by which the Confessions tie us to the Scriptures, we throw off the Scriptures themselves, and our good confession is lost.

So today we rejoice and feast, as did Israel when they heard Ezra read the Word of God to them. We rejoice to fight the good fight, to hold to the eternal life about which we make the good confession, even as Jesus did before Pilate. We rejoice to confess nothing more nor less than Jesus Christ Himself, crucified and resurrected. And, by the grace and help of God, we will hold this same good confession until death. We will say with one of the Lutheran princes, George of Brandenburg, when the Emperor tried to force the Lutherans to cease preaching and to participate in the Corpus Christi parade, worshiping the Sacrament outside the eating and drinking of it, “Before I let anyone take from me the Word of God and ask me to deny my God, I will kneel and let them strike off my head.” God grant it to us also, for Jesus’ sake, unto eternal life.