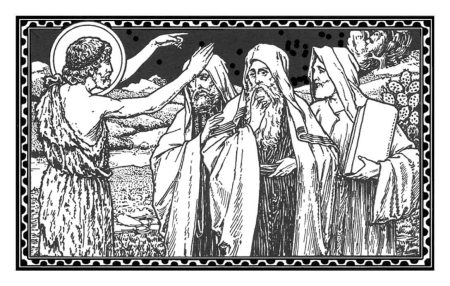 Test everything. Hold fast and retain faithfully what is good. Keep away from every form and kind of evil. Don’t retain it, but refrain from it. If you want to know if something is genuine, you have to test it. How do you know if gold is genuine? You can put a drop of nitric acid on it. If it turns green or looks milky, then it’s not real or fully gold. Real gold will not float or rust in water. Real gold will not be attracted to strong magnets like fake gold will be. If you want to know if your currency is real or counterfeit, there are ways you can tell. The United States Treasury has tried to make it very difficult to counterfeit money. Our money has color-shifting ink in the lower right-hand corner that changes as you move it back and forth. It has a watermark that you can see on both sides of the bill, because it’s embedded in the paper. There’s a security thread that runs top to bottom that has the denomination of the bill printed on it. There is micro printing and fine-line printing in various places. And, if you hold money under an ultraviolet light, it glows different colors, depending on the denomination. $5 bills glow blue; $10, orange; $20, green; $50, yellow; and $100, red. And, of course, at our current moment, it seems that news is what needs to be tested, to see if it’s genuine or fake. Consider the source: is this a reputable news organization, or something I’ve never heard of? Is there evidence for it? Can you find it on some urban legend website? (Even then, you might have to do some more testing.) And, maybe most significant in our polarized society: how badly do you want this piece of news to be true, so perhaps you can use it in an argument against someone on “the other side”? The more it seems to clinch what you already know, the less likely it is to be true. Real life is definitely more ambiguous than our black-and-white arguments.

Test everything to see if it is genuine. The priests and Levites went out into the wilderness to test John, to see if he was a genuine messenger from God. John said, I am not the Christ. Who are you? Are you Elijah? No. Are you the Prophet? No. Then who are you? Give us something to tell the Pharisees who sent us. I am the voice crying in the wilderness, Make straight the way for the Lord. Among you stands One you do not know, whose sandal I am unworthy to untie. I baptize with water, but He will baptize with the Holy Spirit.

If anyone should have been able to test and see whether John was genuine, and whether the One to whom he pointed was genuine, it was the priests, Levites, and Pharisees! But John bears witness to the Light coming into the world to enlighten all people. But people love the darkness rather than the light. All things were made through Him. He came to His own, but His own did not receive Him. So we see it takes more than just our thinking and testing what is genuine. We need more than simply our experience, our reason, our understanding to see the One who stood in their midst and now stands in ours. We can’t trust our own hearts and our own sinful flesh. We can be deceived. We don’t always see clearly. So we need more than our own ideas about what is genuine in order to test everything.

Paul hints at it when he says, Do not quench the Spirit. Do not extinguish the Spirit. Do not put an end to the work of the Spirit. It is the Spirit’s work to proclaim Jesus to you. He calls, gathers, and enlightens a people for God. Do not despise Him who speaks through the prophets of Jesus. And not only does He give us Jesus as the genuine Son of God and Savior of the world, He says that Jesus and His Words are the standard by which everything else is tested.

It is as necessary now as it was for the Thessalonians to whom Paul originally wrote. In his first letter to Timothy, Paul said, the Spirit expressly says that in in the later days some would not hold to what is good, but they would go away from the Faith and listen to deceitful spirits (1 Timothy 4:1-5). And they’re deceitful precisely because they claim to come from God. They quote the Bible. They talk of spiritual things. If they came right out and said, We’re from the devil, who would listen to them? So John says in his first letter, Test the spirits. Don’t believe every spirit that claims to be from God. Test them to see if they really are. Many false prophets have gone out into the world. By this you know the Spirit of God: every spirit that confesses Jesus Christ in the flesh is from God (1 John 4:1-3). The Son of God was conceived by the Holy Spirit, born of the flesh of the Virgin Mary, lived and died in the flesh, was raised in the flesh, ascended in glorified flesh, and will come again to judge the living and the dead in the flesh. Jesus cannot be separated from His flesh or it’s no longer the genuine Jesus.

Where is Jesus, not only according to His divinity, but according to His flesh and blood? Where is His promise given? His word is true, no matter what anyone may say. Let God be true and every man a liar. But since we haven’t seen Him yet; since we are not in the new creation, which will be free of false spirits and deceitful words and the devil himself, it is necessary for us still to test everything, to hold to what is good, and to keep away from every form and kind of evil. We are Advent people, living in a world not too different from the one the Thessalonians lived in. There were all sorts of claims, all sorts of promises, all sorts of teachings and spirits floating around. They were Advent people, not waiting for His first coming, but for His revealing in glory. So we wait.

But we are Advent people who have a Christmas promise. The genuine Jesus is the one who is risen from the dead, and who will bring us with Him into the true and real life of God forever. And the God who called you in His Name by the Holy Spirit is making you holy. He will keep you blameless until the Day of the Lord. So we test everything—everything—by the Word of that Jesus. And God grant it that we hold fast to our confession of hope without wavering, because the one who promises is faithful. He who calls you is faithful. He will surely do it.