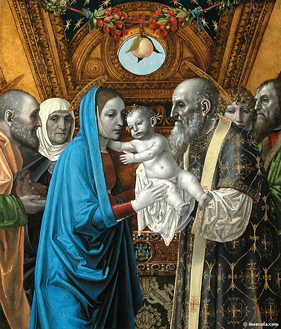 There are all sorts of people waiting in the Gospel reading for today. It begins with Mary. Actually, according to Paul in Galatians 4, it began a long time before Mary—thousands of years before. And in the fullness of time, at the precise moment when God intended, the waiting was over and God sent forth His Son, born of a woman, born under the Law, to redeem those who were under the Law. Mary’s Son is the culmination of all that waiting.

But when Jesus is born, there’s more waiting. Mary has to wait, according to the Levitical Law, 40 days before she can enter into the religious life of Israel. She waits eight days for Jesus’ circumcision and naming, which the Church celebrates tomorrow. And then she waits 33 more days until the time of her purification after childbirth is over. And then she brings her sacrifice of two turtledoves or two pigeons, and she brings Jesus to present Him before the Lord.

There are other people in the Temple who have been waiting for exactly this day. Luke actually has them book-end this part of the chapter, Simeon and Anna. Their waiting is not uncertain, except for the time. Simeon had been given a divinely spoken promise by the Holy Spirit that he would not see death before he had seen the Christ of the Lord. So he knew that it would happen, but he didn’t know when. He is waiting, Luke says, for the “consolation of Israel.” For the comfort that had been long-promised. Comfort, comfort my people, saith your God. Speak tenderly to Jerusalem and cry to her that her warfare is ended and her iniquity is pardoned (Isaiah 40:1-2). This consolation is not simply a state of affairs, not simply a feeling; it is a Person. And it is for that Person that Simeon has been waiting. And now he knows that his waiting has not been in vain. His waiting has all been worth it. God has kept His promise, and now Simeon sees the Lord’s Christ.

How does he know that this family, out of all the families who may have been in the Temple that day, is the one? How does he know that this child, out of all the children who may have been in the Temple, is the Child? Who knows? But somehow he did, and he takes the Child in his arms and he praises God: Now I can die, Lord, whether it’s today or any other day. You have kept Your Word and now I have seen the salvation which You promised, which You prepared before the face of all the people: the light for revelation to the Gentile nations, and the glory of Your people, Israel. The glory of Israel is the light and salvation for all the nations. He waited for the consolation of Israel, and now it has come.

On the other end of this chapter is Anna, who has been in the Temple nearly her whole adult life. She has been a widow for a long time, and she spends her time faithfully fasting and praying. Maybe she overhears Simeon’s words. Maybe she has her own divinely spoken promise. Either way, she has been waiting for the “redemption of Jerusalem,” and now she sees that that redemption is this Child, this Son.

Because redemption is tied to the first-born son, going all the way back to Exodus 13. God says to the people through Moses that every first-born son is holy to Him, as well as every first-born male animal. And they are to be redeemed—bought back. If the animal is not redeemed, it must be killed, but the sons must be redeemed. Why is this? God says that when the children of Israel ask about it in the days to come, they are to be told: “By a strong hand Yahweh brought us out of Egypt, from the house of slavery. For when Pharaoh stubbornly refused to let us go, Yahweh killed all the firstborn of man and animal in the land of Egypt.” The only first-born who are not killed are those who were in the houses marked by the blood of the lamb. “Therefore, I sacrifice to Yahweh all the males that first open the womb, but all the firstborn of my sons I redeem.” (Exodus 13:1-2, 11-16).

As the psalmist says, no one can give the redemption price for himself, let alone all of Israel (see 49:7). This is why Isaac doesn’t die by Abraham’s knife. He is not the son who would or could redeem Israel. But now Anna, who’s been waiting for this redemption, tells everyone that He is the redemption of Israel. He is the only one who can be the redemption price, who will enter the place of sacrifice not by means of the blood of bulls and goats but by His own, holy blood, thus securing an eternal redemption (Hebrews 9:12). No more redemption price to be paid, after this one has been killed and raised. Mary brings into the Temple not only the sacrifice for her purification according to the Law, but the sacrifice for the redemption of all people. Both Simeon and Anna know that Isaiah 52 has been fulfilled: God has bared His holy arm before the face of all the nations. All the ends of the earth have seen the salvation of God. He has redeemed and comforted His people. And those who have been watching and waiting rejoice (Isaiah 52:8-10).

But still there’s more waiting. We come to the end of Luke’s Gospel, and we see two men walking on the road to Emmaus, away from Jerusalem. A third man joins them and asks what they’re talking about. They say, Don’t you know about Jesus of Nazareth, a prophet and a man mighty in word and deed? We had hoped that He was the one who was going to redeem Israel. But now it’s the third day, and it seems like our hopes of redemption have come to nothing. All our waiting has been in vain. And Jesus says, How foolish and slow of heart are you to believe everything the prophets have written! God has indeed redeemed and comforted His people! This third day is the revelation that everything He said and did was true! And their salvation is revealed in the breaking of the bread, and they, like Simeon and Anna, rejoice.

Paul tells us that everything of the prophets words that were written down beforehand was written for our instruction, so that through the endurance and consolation of the Scriptures, we might have hope (Romans 15:4). So we wait, but we do not wait for something we do not know. We don’t even wait like Simeon and Anna and Israel for the coming of one we do not yet know. We wait because we know who He is. We wait because the Lord has already kept His promise. The only waiting that is left is to see what has been told us, what we have now by faith. He has been revealed to us in the Scriptures and the breaking of the bread. We, like Simeon and Anna, go on from this day rejoicing, because we have seen the consolation and redemption of all people. Lord, lettest Thou Thy servant depart this creation in peace, according to Thy Word. He has spoken, He has done it, and now we can die in peace, whether today or 50 years from now. My own eyes have seen the salvation of our God—more than that, my own ears have heard, and my own tongue has eaten and drunk the salvation of our God.

So wait, children of God. But wait in the hope that what He has said, He will do. He has revealed His salvation, His Jesus. He has been raised from the dead. He is our redeemer and our redemption price, secured forever by His own blood. Depart in peace, knowing that death itself is nothing now, because He for whom the whole creation has been waiting has come and will come again.