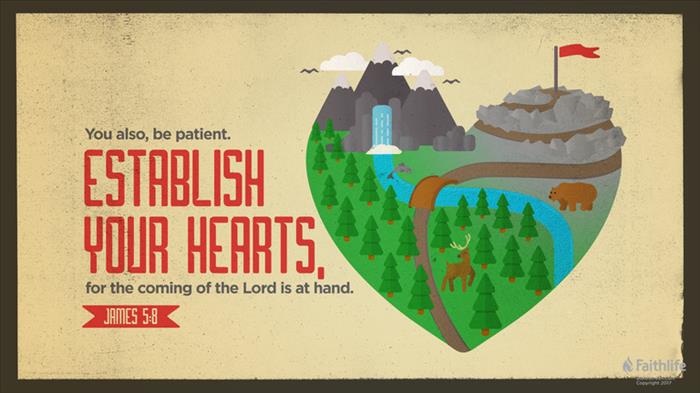 Sometimes the things we need the most are the things we have the least. Like patience. Have you ever asked God to give you patience, or teach you patience, and then you got a bunch of things that tried your patience? Be careful what you pray for; you might get it.

But why do we need patience? Patience is tied to waiting and we don’t have to wait for anything. When I was young, if I was watching a television show in episodes, I watched one episode a week, split up by these things called “commercials.” And if I wanted to find out what happened next, I had to wait an entire week until the next episode. Sometimes, you had to wait the entire summer until the next season. Even worse was when you saw those three terrible words at the bottom of the screen: “to be continued.”

My children will never know any of this. There are no commercials in the middle of shows. They can turn on Netflix and—if I let them—they can watch episode after episode after episode. I didn’t know what binge watching a show would mean, and I couldn’t have done it even if I wanted to. No waiting for a week; watch the next episode right now, all the way through the whole season. Maybe they still have to wait for Christmas, but we’re trying to fix that too.

What do we have to wait for? You can order something on Amazon and it can be there the next day. In some places, it can be there the same day. You don’t have to wait. You can have it right now. And if you don’t have to wait, you don’t need patience. More than that, you can’t wait, because the future is so uncertain. Who knows where we will be tomorrow? Who knows what the future holds? Who knows what God is doing, if there is a God? And in the Church, if our future isn’t tied to Christ’s future, then we must have to do it ourselves, and do it now. We see everything falling down around us, and we conclude that it must be up to us to do and fix and have everything.

That’s what Saul, the first king of Israel does. The prophet and judge Samuel told Saul to wait seven days at Gilgal, until Samuel could come and offer the sacrifices. But Saul’s son, Jonathan, defeated a Philistine garrison, and the Philistines gathered many times the soldiers and chariots against Israel. The people of Israel saw the Philistines and got scared and scattered and hid. Saul sees his armies scattering, and he thinks he better take things into his own hands. He has to do something if he doesn’t want to lose everything. Since he hasn’t seen Samuel yet, Saul decides to offer the sacrifices and try to keep more people from leaving him. But when Samuel comes, he says, “What did you do? If you had obeyed the command of God and done what I said, then God would have established your kingdom forever. But He is searching for a prince for his people after His own heart.”

James tells us to take the examples of the prophets who suffered and endured. Take the example of the suffering of Job, who didn’t suffer in resigned silence. He questioned and prayed and cried out and lamented to God. But in all of it, he refused to let go of God as the end of everything that was happening to him. His wife couldn’t wait. She said, “Just curse God and die.” His friends couldn’t wait. They said, you must have done something wrong; just confess it and God will put everything right again. But Job said, “Yahweh gives and Yahweh takes. Blessed be the Name of Yahweh.”

Or what about John? He’s sitting in prison and waiting for the Messiah to act. He once preached that Jesus was that Messiah, bringing the Kingdom of God. But what about now? Where is the burning fire of judgment? Where is the destruction of the wicked? Why doesn’t He gather His own to Himself like wheat into a barn? Why hasn’t He fulfilled the promises of Isaiah, especially the one about the prisoners going free, and liberating the captives? So John sends messengers to Jesus: are You the one for whom we’ve been waiting? Or should we wait for someone else?

James says we’ve seen and heard about the prophets and about Job, about their patient endurance in the midst of suffering and hardship and cross. Be patient, James says. Don’t assume the Lord isn’t acting because you can’t see it the way that you expect or want to see it. Be patient like a farmer. I used to be surrounded by farmers in Minnesota. And I imagine that they weren’t always patient, or they didn’t always want to be. When it was raining and they had work to do in the field, I don’t suppose they really wanted to wait for it to stop raining. When it wasn’t raining, and they needed the rain for the crops, I would guess they didn’t really want to wait for the rain. Maybe they had trouble being patient when it came to waiting for the crops to be mature enough to harvest.

But they didn’t have a choice. They couldn’t force the rain or the sun or the harvest. The farmer, James says, waits patiently for the precious fruit, for the early rains and the late rains, which God gives in His own good time. Be patient like that farmer and plant your heart steadfast and immovable in the Word of the Lord. He will pour out His Word to take root and then He nourishes it at the beginning and at the end. Like rain or snow coming down from heaven, His word will not return empty, but it will do what He sends it to do, your salvation.

In the middle of a world that cannot wait because it doesn’t see any future, Advent pulls us out of the attention deficit culture, out of the headless and heedless rush and says, you can wait. Patience is tied to waiting, but both are tied to the conclusion of all things. You know the goal and purpose of God, the end to which He is bringing all things, says James. Because you know the end, you can wait. And Advent reminds us that we are waiting for something and someone who is absolutely certain. Advent says come and sit, take a rest, hold on. The one for whom you’re waiting is trustworthy. Advent pulls us into the waiting of God. In fact, if anyone ought to know how to wait patiently, it should be the people of God. The people of God waited for thousands of years for the coming of the Messiah. And at just the right time, God sent forth His Son, born of a woman. And the Church has been waiting for thousands of years for the appearing of that Son in glory, resurrected and ascended. But James reminds us that the coming of the Lord is always near. The door is always this close to being opened.

We live by the waiting of God. Peter assures us that God is not slow in keeping His promises, as some—as we—understand or count slowness. He is patient with us—if you thought we had to be patient waiting for God, how much more would God have to be patient with us! He is patient toward us, not wanting anyone to perish, but everyone to come to repentance. Advent pulls us into that waiting and reminds us that God’s end for us is compassion and mercy in Christ. He calls, gathers, sustains, and perfects us. You can wait, because it’s not in your hands, and it never was. He began this good work in you. He brought you into that good work in Christ when He put you into Christ’s death and resurrection. He feeds you that resurrection life in the Supper and He will finish what He started. His Advent draws near to its end; you can wait in patience.