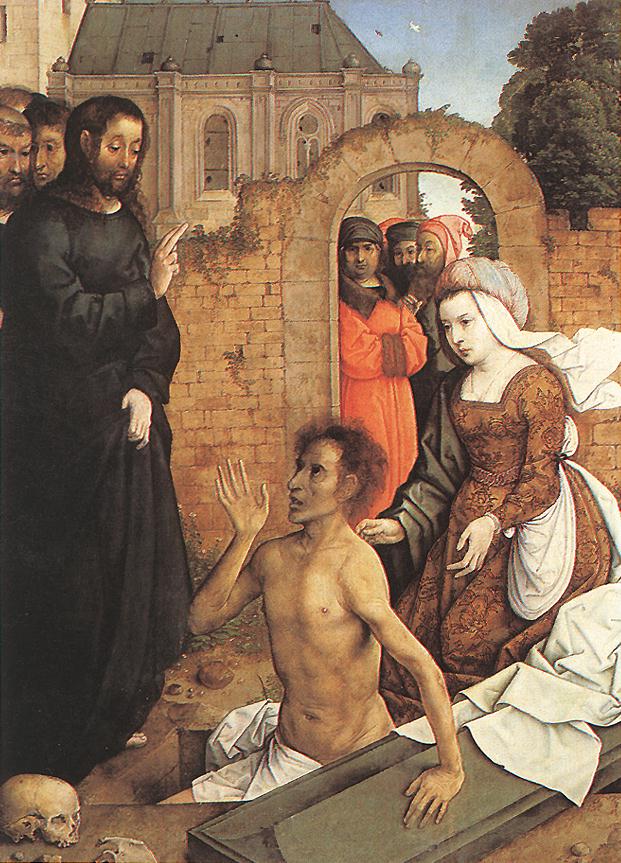 Video of the Divine Service here. The sermon begins around the 22:00 mark.

No, I don’t know what Lazarus’s experience was like those four days in the tomb. And I don’t know how he felt about being called out of the grave by Jesus after four days being dead. I do know that he wasn’t a half-dead zombie the way that the movie The Last Temptation of Christ depicts him! Jesus gave him back his full earthly life. I do wonder whether those four days felt like an eternity. Or maybe I’m just thinking of the past two weeks, which feel like months or years. It feels like there’s been too much thinking, considering, planning, trying to figure things out crammed into two weeks, more than should fit. I don’t know about you, but my mind is exhausted.

Even so, we have the same Lord, the same promises, the same Gospel, the same hope, the same Word. The Lord is still alive, still keeping us, still sustaining us by His Word and Spirit. Lent is always a time of longing, but maybe even more this year: longing for the day when we can gather together again here, around Christ’s Word and His Supper as the Body of Christ in this place; longing also for the fulfillment of all the promises of Christ to our sight and not just to our faith, all the promises that He gives here again to Mary and Martha and Lazarus.

He tells His disciples that this sickness, this weakness, of Lazarus does not lead to death, but that it’s for the glory of God and so that the Son of God might be glorified. For those who don’t think that Jesus refers to Himself in divine terms, He does so very clearly here. Actually, in the last three weeks, we’ve heard Jesus call Himself by three different titles. Last week, we heard how Jesus found the man who had been born blind and asked him, Do you believe in the Son of Man? He said, Who is He, that I may believe in Him? You have seen Him and He is the one speaking to you.

Two weeks ago, we heard about Jesus speaking to the woman at the well in Samaria and she said to Him that they knew that the Christ was coming, and that when He came, He would tell them all things. Jesus says, I, who speak to you, am He. In fact, all three of these accounts from John’s Gospel have been, for a very long time, used in the Church to proclaim what God is doing for people who come into the Church by Holy Baptism and who are then joined to the Holy Communion of the Church. We are being given living water from the side of Jesus, the Holy Spirit who brings us the eternal life of Christ. We who were blind are now given sight to see Jesus and to believe and worship Him. We who were dead in our trespasses and sins, He has raised us from the dead and called us out of the grave to Himself.

Here He tells His disciples, Lazarus has fallen asleep, but I am going to wake him up. And here is another place where Jesus says something and it is taken at face value and misunderstood by those who hear Him. Well, Lord, if he’s sleeping, what’s the big deal? He will be saved—that is, he will recover. But Jesus didn’t mean the sleep of sleep, but the sleep of death—and He is going to wake him up. He tells them plainly, Lazarus has died. And I rejoice that I was not there, so that you will see and believe. This is what happened at the beginning of Jesus’ signs, and now here at the end of His signs: the disciples see all that water turned to wine, and they believe in Him. Here, too, that they might see Jesus raise up Lazarus and believe in Jesus.

So they go to Bethany, and Martha meets Jesus at the gate of the city: Lord, if You had been here, my brother would not have died. Mary says exactly the same thing. They believe that Jesus can heal Lazarus’s sickness. And Martha does say, And even now, I know that whatever You ask, God will do for you. Jesus says, Your brother will rise. Yes, Martha says, I know that he will rise in the resurrection on the last day. And that’s true. But Jesus says, I am the resurrection and the life. The last day has already come, ahead of time. Jesus is here, so what will be true on that day for everyone, happens where Jesus goes. Whoever believes in Me, even if he dies, he will live. And whoever, believing in Me, lives until that Day, will never die into the age—the age to come, forever. Do you believe this? He says. Yes, Martha says, I have believed that You are the Christ, the Son of God, the one coming into the world.

So Jesus goes to the tomb and tells them to move the stone and He says, Lazarus! Come out! And the dead man is no longer dead. As God had spoken to Ezekiel, You will know that I am Yahweh, when I open your graves and bring you out of your graves, My people. I will put My Spirit in you and you will live. When God appears, you know that He appears because He opens graves and raises dead people. This is the conclusion of Jesus’ signs that say that He is the Christ, the Son of God and the Son of Man, whom the Father has sent into the world.

And now comes His glorification. It begins at the end of this reading, in verse 53: from that day—from the day of Jesus raising Lazarus from the dead—Jesus’ enemies decide and will to kill Him. People are believing Him because He raises Lazarus, and so He has to be killed. But that killing is exactly His glorification. His exaltation, His lifting up, His death is His glory; He was given by God into death, just as Moses lifted up the serpent in the wilderness, and when He is lifted up, He will draw all people to Himself. Look! Here I am, He says, life in the midst of death. This is what His glory looks like in this age. It looks like crucifixion, suffering, and death; what looks like death to human eyes is actually God’s life being given out on the earth. He breathes His last, and He hands over His Spirit, and water and blood flow from His side. That’s what the glory of God looks like in this age, and it is all we will see here.

But the same Jesus who was glorified and enthroned on the cross is the Jesus who has taken up His life again, raised from the dead, and begun in His own body the next, resurrection age. He shows the apostles His hands and side to demonstrate that that new age of eternal life has appeared. Thomas looks and falls on His knees: My Lord and my God!

And this is the eternal life, Jesus prays to His Father, to know You, the only true God, and Jesus, the Christ whom You have sent (John 17:3). That is the revelation that Jesus gives in these signs. And that’s why John records them. He says that Jesus did a lot of other signs, but these signs were written down so that you might believe that Jesus is the Christ, and believing Him, have eternal life.

So while we wait for an end to this Lent, and the end of our longing to see the resurrection life, Jesus reminds us again that the resurrection that will happen on that Day is the resurrection He brings now in Himself. It is not different, except in the difference between faith and sight. So our longing is right, for Christ and His living Body and Blood now. We long for Him to gather us together again. Though we take care for our neighbor in love, aiming at the keeping of the Fifth Commandment not to murder, but to do what is good for everyone’s body and life, we know that death cannot harm us, not forever.

We do not take lightly death in this age. Jesus doesn’t. He sheds tears at the grave of Lazarus. Jesus Himself, on this side of death, sheds tears that will be wiped away in the resurrection. So we too will not take death lightly. We seek the good of our neighbor’s life, and we weep and mourn and grieve at death in this creation. But we know that a Day is coming—a Day that is already here in Christ—when every tear will be wiped away by God, when there is no more crying or mourning or pain anymore, when our Good Shepherd leads us to streams of living water. I pray this Lent and this time creates in you the longing for Christ’s resurrection life, here as He gives it to us in His gifts, and there as He gives it to us in its fullness. I pray that you will hunger and thirst all the more for Him, until the day when hunger and thirst and lack are no more. You will know that He is Yahweh when He opens your graves, and raises you from your graves, O His people! He is Yahweh. He has spoken, and He will do it.