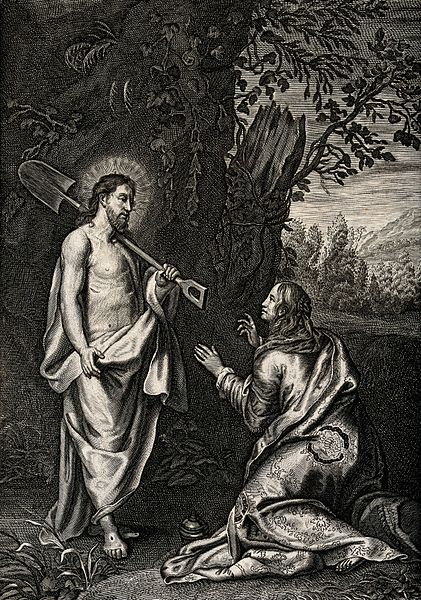 Alleluia, Christ is risen! He is risen indeed! Alleluia! And the Christ who is risen is the Christ who was sacrificed. The Christ who lives forever is the Christ who was slain. He who is the Lamb of God who takes away the sin of the world is the great High Priest. He sets Himself as a mediator between God and us, bringing us back together with God in His own flesh, since He is both God and Man in one person. This is the One whom Mary found outside the tomb that was filled with the light of those angels. She thought He was the caretaker of the garden in which the tomb was found. But she found that He was both the gardener and the single grain of wheat which falls dead into the ground. But because He died, He bears much, living fruit. And Mary is the beginning, sent back to tell the new Israel, Jesus’ brothers, that God is now their God; the Father is now their Father. She cannot cling to Him there in the garden, because He is ascending to the Father, in order to be with many people at many times and places. There, where He has promised to be, she can cling to Him. There, in His Words, brought to our remembrance by the Holy Spirit. There, in His Absolution, given to the disciples along with the Holy Spirit on the evening of the Resurrection day. There, in His flesh and blood, which He gives for the life of the world. There, Mary and Peter and John—and we—cling to Him until we see Him face to face, crucified, resurrected, ascended, and reigning forever over a city that contains the Garden with the Tree of Life, which the Gardener gives for the healing of the nations.

To eat the flesh and blood of Jesus is to eat the pure, unleavened bread of the New Passover. And it is by Him that the old yeast is swept up and thrown out. Here, this morning, again, the Lord commences His spring cleaning: gathering, cleansing, restoring—and He does it whenever and wherever His Word and Gifts are kept, heard, received, eaten and drunk. Christ is both the bread of life and the Passover Lamb, given to be sacrificed and eaten by His faithful people. His blood now marks our door; faith points to it, death passes over. And we eat in readiness, ready to depart this sinful flesh and sinful world, not to be unclothed, as Paul says, but to be further clothed, our mortal flesh with immortality, cleansed of sin and death. We depart in death, but death is not the goal. Resurrection is. Jesus didn’t die to be free of the body that was crucified, but that the crucified body might be raised. And it is in the joy of His resurrection and in the joyful hope and expectation of our resurrection, that we keep the feast. This is the feast that is eaten in sincerity and truth, for which we’ve prayed throughout the entire Lenten season. This is the feast of Jesus, by which His life sustains us in this desert of death. This is the feast by which our evil and wickedness is undone and removed. This is the feast of victory for our God.

So eat up: read, mark, learn, and inwardly digest the words of your living Lord. Hear them; devour them; hunger and thirst for them—that is, hunger and thirst for Him, who is the living bread from heaven. Those who came through the Red Sea in victory over the Egyptians ate bread from heaven and died. But Jesus is the true Bread and those who eat His flesh and drink His blood in the simple faith that He does what He says have life eternal. Those who are alive when He is revealed will never die; and those who die will be raised again. He cannot die anymore, and those who eat this Passover Lamb cannot stay in their graves any more that He could, who is the Resurrection and the Life.

“Our Paschal Lamb, who sets us free, is sacrificed. O keep the feast of freedom gallantly; let alleluias leap. … Let all our lives now celebrate the feast; let malice die. Let love grow strong anew, and great, let truth stamp out the lie. … Let all our deeds, unanimous, confess Him as our Lord who by the Spirit lives in us, the Father’s living Word” (LSB 473:1-3). Alleluia! Christ is risen! He is risen indeed! Alleluia!

In the Name of the Father and of the Son and of the Holy Spirit. Amen. “And the peace of God, which surpasses all understanding, will guard your hearts and your minds in Christ Jesus” (Philippians 4:7, ESV).  Amen.]