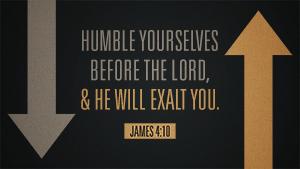 A few weeks ago, we heard that the fear of Yahweh is the beginning of wisdom; the knowledge of Christ, His holy one, is true understanding. This is what Peter and the other apostles found, though they didn’t rationally understand any more than anyone else.

Today, St. James shows us the fruits of that heavenly wisdom, which is given by God the Holy Spirit, versus the wisdom that comes from below, from the devil who currently rules this creation. Of course, it would be nice to be able to divide us up neatly into groups: those who have the heavenly wisdom and those who have the earthly wisdom. And, in the end, that is the true reality: those who are in Christ have the true wisdom that will be revealed as the only reality on the last day; while those who are captive to this earth and the devil’s will have the false wisdom that will be revealed for what it is on the last day.

But until that day, we are double-minded, double-tongued, double-hearted. My brothers and sisters, as James says, it should not be this way. How can those who belong to Christ both praise God and curse those whom God has created and Christ has redeemed? It makes as much sense as a fig tree bearing olives or a grapevine producing figs, or a self-contained, saltwater pond producing fresh water. Whenever Christians speak evil or act according to the wisdom of this world, they betray their true nature as baptized children of God. Nevertheless, this is how it is in this life and this creation.

But Christians, who have the mind of Christ, do not simply accept this state of affairs as okay, as good, as normal and acceptable. What do Christians do when they discover this undrinkable salt water coming from what should produce only fresh water? They do what James commands: they draw near to God in repentance and confession. They change their laughter into mourning and their joy to gloom. They humble themselves in wretched recognition of their sin, and they plead the mercy and blood of Jesus. And Jesus is always merciful. God does draw near in the words and flesh and blood of His Son to cleanse and purify us. He lifts up those who are bowed down. He restores the devastated. He comforts the afflicted.

But He opposes the arrogant and proud. His wisdom is opposed to everything that belongs properly to our sinful natures: to jealousy and selfish ambition that create disorder and every evil practice. He opposes the spirit of bitter zeal, which, as one teacher wrote, is “factious, arrogant, bigoted. Its roots [lie] in the angry passions of the heart. Its aim [is] personal victory rather than the triumph of the truth. While it may be sometimes dutiful to contend earnestly in defence of the gospel, the love of controversy for its own sake, and the cherishing of a contentious spirit towards brethren, is always sinful, much less a ground for ‘glorying.’ A professing Christian who lives to foster either doctrinal wranglings or social quarrels presents to the world a caricature of Christianity, and is himself a living lie ‘against the truth.’”1

This is a description of the “greatness” of the world that Jesus Himself opposes among His disciples, that they aim at personal greatness and personal victory at any and every cost, even and especially the tearing down of other disciples of Christ. This is adulterous friendship with the world, and it makes us enemies of God. In the world, it doesn’t matter if people are on the right or the left, conservative or liberal, Democrats or Republicans. According to the wisdom of the world, the only goal is to win. The only goal is to accomplish one’s own purposes. When reason and calm argument do not get people what they want, what do they do? They slander and smear. They dig up dirt on their opponents. They use their financial resources to make sure that those who oppose them must relent and give in.

In the Church, it’s even worse. And, of course, James is addressing those in the Church over against the world. Of course the world would act according to worldly wisdom. But God’s Christians should act according to heavenly wisdom, which makes no sense to unbelievers, because the Gospel has no coercive power. People either believe it or don’t. No one can be forced to believe.

But the enemies of the Gospel use anything and everything to silence the Word. When the Word of God is not on their side, they do what the world does: smear, slander, gossip, and use the gifts of God to punish those who will not give in. “What causes quarrels and what causes fights among you? Is it not this, that your passions are at war within you? You desire and do not have, so you murder. You covet and cannot obtain, so you fight and quarrel. You do not have, because you do not ask. You ask and do not receive, because you ask wrongly, to spend it on your passions.”

This is what happens in the Church when people seek something other than the true doctrine of Christ. As St. Paul says to Pastor Timothy, that person has “an unhealthy craving for controversy and for quarrels about words, which produce envy, dissension, slander, evil suspicions, and constant friction among people who are depraved in mind and deprived of the truth” (1 Timothy 6:4-5).

No, this is not the way of Christ and His Word. He is handed over to be crucified, rather than utilize His divine power to punish His enemies. Because it is precisely for His enemies that He is crucified. Father, forgive them, because they don’t know what they are doing. Angry bitterness and selfish ambition and a party spirit have no place in the Church of Christ. There are no parties and no factions except two: Christ and the sinners for whom He died. We are all the least, for whom the Greatest One became the least. We are all the humiliated for whom the Exalted One was humiliated, even to the point of death on a cross. It is only when we forget our standing before God in Christ that we drift into the party spirit of the world.

This is not the way of Christ and the Wisdom of His Word. The wisdom of the mind of Christ flows into His own blessed ones. His word sows peace and it bears the fruit of righteousness in peace. The wisdom from above is pure, and peaceable; forbearing under provocation; “hard to provoke and easily pacified.” Slow to anger and quick to forgive. Love does not keep a record of wrongs done to it, in order to refer to them in the future. This is as good a principle for the conflicts within the Church as it is for the conflicts within a marriage.

So Paul says that the “Lord’s servant must not be quarrelsome but kind to everyone, able to teach, patiently enduring evil, correcting his opponents with gentleness. God may perhaps grant them repentance leading to a knowledge of the truth, and they may come to their senses and escape from the snare of the devil, after being captured by him to do his will” (2 Timothy 2:24-26). “As for a person who stirs up division, after warning him once and then twice, have nothing more to do with him, knowing that such a person is warped and sinful; he is self-condemned” (Titus 3:10).

In the face of such double-mindedness, such sin, such anti-Christian behavior in ourselves and in others, there is only one place to turn: in submission to God, we draw near in confession of our sins and confession of His mercy. And the prayer of Paul is also the prayer of all Christians: that “the God of endurance and encouragement grant [us] to live in such harmony with one another, in accord with Christ Jesus, that together [we] may with one voice glorify the God and Father of our Lord Jesus Christ” (Romans 15:5-6). Who knows, perhaps He will have mercy even on such as us.