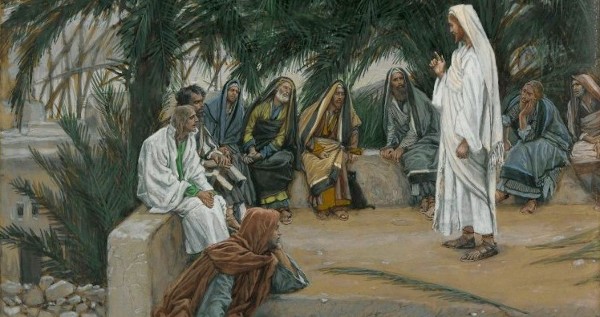 I don’t know if you have been watching the Supreme Court confirmation hearings for Judge Kavanaugh. But if you have, I’m pretty sure you’ll agree with me: I would never want myself or anyone I know—not my worst enemy—to be nominated to a public office like this. Nor would I want to be the one called upon to testify to any kind of accusation in such hearings. You have your entire life laid bare, picked apart, and made public for people on the internet to condemn or excuse.

As I said last week, this is the sort of culture we find ourselves in, a culture where there are only winners and losers. If you’re not with us, you must be against us. And I think John and the other disciples fall into this sort of party spirit a little bit here in Mark 9. Jesus has just gotten done saying—we heard it last week—whoever receives one such child in My Name, receives Me. And whoever receives Me, he receives not (only) Me, but the One who sent Me. Whoever receives a child in My Name.

And how does John respond? He says, we saw someone casting out demons in Your Name. Did they receive that one? No, they hindered him. They prevented him. Just as they would do later with the parents bringing little children to Jesus. They prevented them. And Jesus said, do not prevent them. Let the little children come to Me, for of such is the Reign of God. So He says now: do not prevent them. Do not hinder them. Whoever is not against us is for us. They should have received that one and welcomed him among the disciples of Jesus.

It’s like what happens in Acts 18, when Apollos is boldly proclaiming Jesus in the synagogue. Priscila and Aquila are there, and they don’t prevent him from proclaiming Jesus. What do they do? They take him aside privately and “explain more accurately the things of Jesus” to him. And then he goes back to boldly proclaiming that Jesus is the fulfillment of the Scriptures.

The exorcist that John sees may not have had everything right. But He’s doing a work of mercy in Jesus’ Name. He’s doing the work that Jesus came to do: to overthrow the reign of the devil and reign over all creation Himself. This is a work of mercy, remember, that the disciples very recently were not able to do, when it came to the man and his son, possessed by an unclean spirit. And Mark 16 says that casting out demons was a sign that would accompany those who believe in Jesus, not those who don’t. The disciples should have welcomed him to follow Jesus with them.

The problem is the same problem that tempts us all: to apply the Law of God—or any law for that matter—and to apply the circle of Jesus’ mercy more strictly to others than to ourselves. We are always ready to apply the Law of God to others, and to apply it strictly. Because we have reasons, we have excuses, we have justification for why we acted the way that we did. But that person can’t have any reasons or justification: condemned, period. And then we apply the circle of God’s mercy to ourselves, assuming ourselves inside it, while hesitating or refusing to give that same mercy to others.

It’s easy for us, to paraphrase Jesus, to assume that we do not need any amputations, while everyone else needs to cut off hands and feet and pluck out eyes. But Jesus gets to the heart of the matter when He says that it’s no good to keep everything we call ours if it lands us in hell. It would be far better to have fewer hands, fewer feet, fewer eyes, and to enter life in the Reign of God. Which is another way to say that it doesn’t do you any good to gain everything in this world and forfeit your eternal life.

Better to enter life maimed, crippled, lame, dead. Which is the only way to get there, in the beginning and in the end. Jesus tells us what the real problem is in chapter 7. (We should remember that the Gospel is a whole, not cut up into little pieces, as we hear it on Sundays.) There Jesus says that the real problem is our hearts. We wouldn’t sin with our hands, or sin where we go, or sin with our eyes, or sin with ears or tongue, if our hearts weren’t evil. Jesus gets to the heart of the matter when death is the only solution to the sin problem. Sacrifice, in other words.

The word that’s translated “hell” here three times is the Greek word “gehenna,” which originally referred to a sort of all-encompassing garbage dump outside the city, where all sorts of trash, unwanted corpses, everything went. It became an image for the eternal place of hell, as Jesus uses it here. And it’s where Jesus goes: to the place where all the shame, trash, disgust, unwanted human beings are. He goes there. All of the sinners, the dying, the maimed, the crippled, in body, mind, and soul; the abused and the accused. Jesus goes to them and takes their shame on Himself, so that their death becomes His. All of the things that you and I would never want to be exposed to the world, all the shame and guilt, Jesus already knows it. He already knows it. And He knows the wounds that you’ve inflicted, and the wounds that have been inflicted on you.

Jesus is sacrificed outside the city to make us whole and holy, and what does Jesus say? Everyone will be salted with fire. The fire and salt of His sacrifice. Therefore, Hebrews continues, let us go to Him outside the camp and bear His reproach. All those who belong to Him will be salted, will suffer the same reproach that He suffered. Everyone will be salted with fire; live at peace with everyone. Because we are all in the same boat, all the little ones for whom Christ died, whom He receives. We are all the little ones who believe in Him, and here there is no greater or less; there are only those who bear His Name.

And here we have no lasting city. Everything here—everything—is temporary and passing away. We are waiting for and seeking the city that is coming, the eternal city, the New Jerusalem, coming down out of heaven from God. There God will dwell with His people and we will dwell with Him, and the Lamb who was slain will be our eternal Good Shepherd.

Through Him, then, let us continually offer up a sacrifice of praise to God, that is, the fruit of lips that acknowledge His Name. Do not neglect to do good and to share what you have, for such sacrifices are pleasing to God (Hebrews 13:10). We bear His Name, and so we have an altar from which those who serve the flesh have no right to eat. The sacrifice happens outside the city, and the death. But the life in the blood is brought in and offered and given. So His blood and so His body, given and shed, shared at this altar.