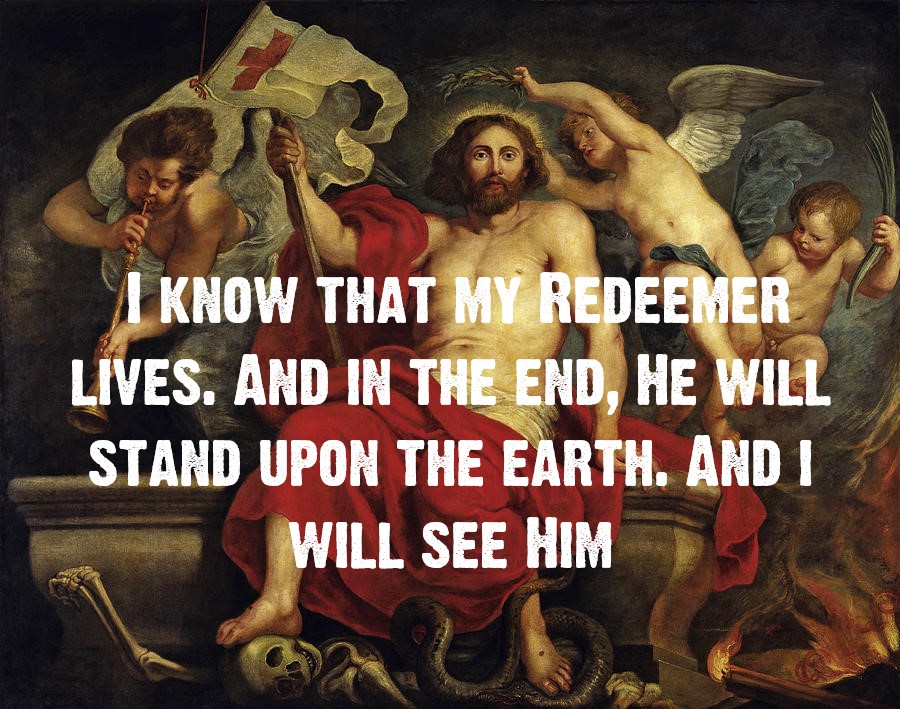 It’s maybe one of the most—if not the most—recognizable Easter hymns: “I Know That My Redeemer Lives.” Because of its familiarity, it’s one of the few Easter hymns that is requested for funerals. But I wonder how many people know that its title comes from these verses in Job? But if anyone knows anything about the longing for redemption, it’s Job.

Job is suffering and he has no idea why. Very Bad Things are happening to him, and it seems as if God has abandoned him. He’s lost flocks and herds, servants and sons and daughters. He’s lost his good health. His wife said it would be better for him to simply curse God and die. His three “friends” keep telling him that he must have something to confess, something that he did that God is holding against him. Come on, Job, they say, God wouldn’t be doing this to you if there wasn’t some evil in your past that you refuse to confess. God is just, and He wouldn’t do this to you for no reason. With friends like these, huh?

Now we know that God has allowed the devil to do this to Job. The devil says that the only reason Job worships God is because God has blessed him abundantly. If all the material blessings are gone, Job’s worship will be gone too. So God allows the devil to take away those blessings. We know that God has allowed the devil to do these things, but Job doesn’t know. When Job raises his complaint that he is innocent—or if he’s not innocent, let God reveal his sin to him so he can confess it—when Job raises his complaint, God does not say, “Job, it wasn’t me. The devil did it.” God seems perfectly fine with Job believing that God is the cause of his suffering.

And, really, does it matter all that much whether God is causing the suffering or simply allowing it? It doesn’t matter in terms of Job’s suffering. Either way, Job is experiencing the same things. So for, oh, 37 chapters, Job suffers and has no answer. The distance between his voice and God’s ears might as well be infinite, for all Job knows. The sky might as well be made of iron. He has no evidence that God exists, let alone that God hears him, let alone that God wants to or can do anything to help him.

But halfway through the book, Job says the words that we heard a minute ago: “I know that my Redeemer is living, and afterward He will stand upon the dust. And after my skin has been struck off (by all these afflictions and suffering), this!: from my flesh I will see God, whom I will see for myself—my eyes will see, and not another. My heart faints in my chest!”

Job’s longing is a longing of all people that everything would finally be put right, not only for him, but for all creation. But he is included in all that creation. So to put creation right is to put things right for him too. In the midst of a world that looks nothing like the Garden of Eden; a world where we have numerous reminders daily about just how far away we are from paradise; a world that has turned away from its creator; a world that doesn’t look all that different in terms of sin and death from how it did before Jesus appeared—this is the world Job sees. And it is the world we see. Where is the redeemer of this world?

The word “redeem” means to buy back, but it has a very specific meaning in the Old Testament. A redeemer is someone who shares your blood, who is able to buy back the land God gave your tribe in the Land of Promise. So if you belonged to a certain tribe of Israel, a certain family, who had certain land, and you had to sell that land for some reason, that land wasn’t gone forever. Someone who was related to you could buy back the land on your behalf. This is what happens when Naomi and Ruth return to Israel from Moab. Boaz is a relative of Naomi’s husband, but there is another redeemer who gets the first chance to buy back the land for Naomi. But that relative can’t do it, so Boaz does. And when he does, he redeems not only Naomi’s land, but Ruth with her. Their child is treated as a descendant for Naomi, who had none, and he is an ancestor of Jesus Himself.

The full name is “kinsman-redeemer,” someone who shares your blood—kinsman—and can buy back what you lost—redeemer. That’s what Job is waiting for: someone who shares his blood who can buy back all he’s lost. That redemption might not come until after Job is dead, but he holds to that hope even in the face of a bitter wife, unhelpful friends, an absent God, and death and loss.

And He knew even more deeply than Job the absence of God. He is the greater and more innocent Job. And God did not answer Him when He cried out from the cross. It was only after His body was struck with death, and after the spear had be put into His heart, and after He was dead and buried, that God answered Him. But that answer is the eternal answer to all people and all creation: God has raised Him from the dead. He knew that He had a Father who would restore Him flesh and bone, body and soul. And in that resurrection, the flesh of Jesus becomes our life-giving redemption and the restoration of all things.

I am your Redeemer, and I am alive forever. I wrote you on to my palms with nails. All your joyful and distraught words have been carved into the Rock who is Christ. And from the pierced side of that rock flows living water, given us to drink. There is no suffering, no dying, no death, no affliction that can keep you from seeing Me. And on the last day, when the crucified and resurrected Jesus stands on the earth, we will see Him with clear and resurrection eyes. You will see Him then. And because you will see Him then, you can say now, with Job and all God’s saints, I know that my Redeemer lives! With my eyes I will see Him. From within my transformed, resurrection body, I will see Him. How my heart longs for that day!