[For some reason, the live Facebook video did not post. Here is the text of the sermon for Ascension Day.]

The disciples are “gazing into heaven,” “watching as a cloud took Him from their sight.” Who knows how long they might have kept looking up, at the place where Jesus had been before He was hidden by the cloud? Eventually, I would guess, they would have started looking around, and then they might have asked each other, “What now?” What, now that Jesus, who had spent 40 days with them after His resurrection was no longer with them in the way that He had been? He is in heaven, wherever that is, and they can’t see Him anymore. What now?

We are not different from the disciples, except in that they had those years and those days with Jesus before and after His resurrection. We are not different in that Jesus is hidden from our eyes still. He is still in heaven, and He has promised to return, as the two men in white told the disciples. But what now? We might have all sorts of questions about what God is doing, or what we’re supposed to do, or why such a long delay between Jesus’ ascension and His revealing in glory, when every eye will see Him.

It would be easy to think of the time between His ascension and His glorious revelation as a time of His absence, during which we are left to figure things out for ourselves, wandering blindly and aimlessly through an unfriendly world. What now? And that might have been the disciples’ question even more than ours. They must have felt the loss of Jesus’ visible presence more keenly than we, who have never seen Jesus visibly. So perhaps we can learn from the disciples and follow their example after the ascension.

END_OF_DOCUMENT_TOKEN_TO_BE_REPLACED 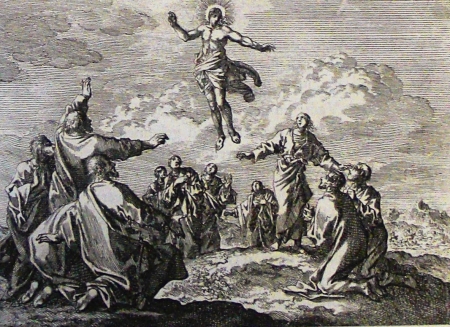 Video of the Divine Service here and here.

END_OF_DOCUMENT_TOKEN_TO_BE_REPLACED

Download or listen to The Ascension of Our Lord, “Gone Away To Be Present” (Acts 1:1-11)